A reader named John got in touch recently wanting to share his travails with Reserve Square. His story is below.

I read your May 1, 2015 story on K&D's little mouse "problem" at Reserve Square. The problem is that I read it too late. I just wanted to share with you my story of moving to Cleveland. Last June I was told I would be assigned on a project in Cleveland that would be longer term in nature and that I would need to immediately relocate to Cleveland for said position. Given that I needed to be there in two days to be at my new assignment near downtown that Monday, I immediately sought out housing, which led me to reach out to K&D. They offered me a corporate housing unit within their "premier living headquarters" of Reserve Square. As we hustled through the appropriate paperwork, I should have figured this was far too smooth of a process. I was correct.

I arrived on a Sunday night where I was greeted by "security," acting as sort of a front desk type person, though Barney Fife would be a more apt comparison. I was given the key to my unit and I hustled to move in my own items with no help other than their dolly. My car would be allowed to park in the Reserved K&D parking spot (see pictures) until a leasing agent could provide me a permanent parking pass for the parking deck. Special parking! Fine. Fair. Work tomorrow.

As I wake to my new surrounding on Monday morning, I head down the elevators to make my short walk to where I was expected to show up for work that morning. As I head out the front door I am greeted by the following: 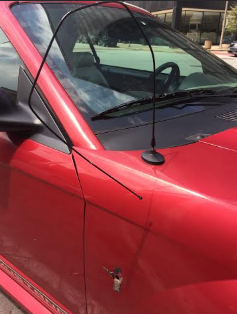 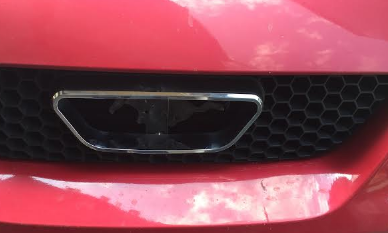 Someone overnight had scratched every keyhole, stole every Mustang emblem, and bent my antenna in some kind of absurd attempt to unlock the car via the "fishing" method. All of this happening with "security" literally ten feet away, at least in theory.

A one-off odd experience my first night in a new city? No big deal. After all, no move goes as smoothly as planned, right? As I got acclimated to my new position and met all of the new people I would be working with throughout my first day, I knew that I would need to get to a precinct to file a police report later in the day. I first went back to Reserve Square only to find two "security guards" that were absolutely clueless as to what may have happened to my car that was parked in vision of the security desk. I was told that they also probably wouldn't have security tape footage of the incident and could be of no help to me in filing a police report. Fun times. I figured I would throw my work bag up into my apartment and head out to a police station downtown where I could file a report on my car damage/break-in. As I opened the door to my unit my eyes were met by the following.


Somehow my whole entire apartment had flooded, damaging everything I own in some capacity. I was never informed via phone call. Clearly this unit was not ready to be inhabited by a human.

They apparently must have known/heard something was wrong and went to town on the apartment while I was at work. The worst part wasn't even the flooding probably. They basically just took all of my belongings and threw everything further away from the patio where the water was coming in. Sadly they kept most of my bags on the ground where the water spread, damaging two laptops and waterlogging most of my important documents (SS card, tax forms, Passport, etc) and luggage. If they would have given me a call at least I could have told them to be careful with my personal belongings or came back to the unit myself to help. Outside was ankle-high water. They told me there were "clogged drains," which is the only thing that made sense because I saw gunk buildup and cigarette butts floating everywhere.

In the span of 24 hours everything I own was in some form or another destroyed by Reserve Square incompetence. When I ask them for any kind of reimbursement, help, or assistance they could offer, they essentially told me it's not their problem.

Have a similar story? Get in touch.