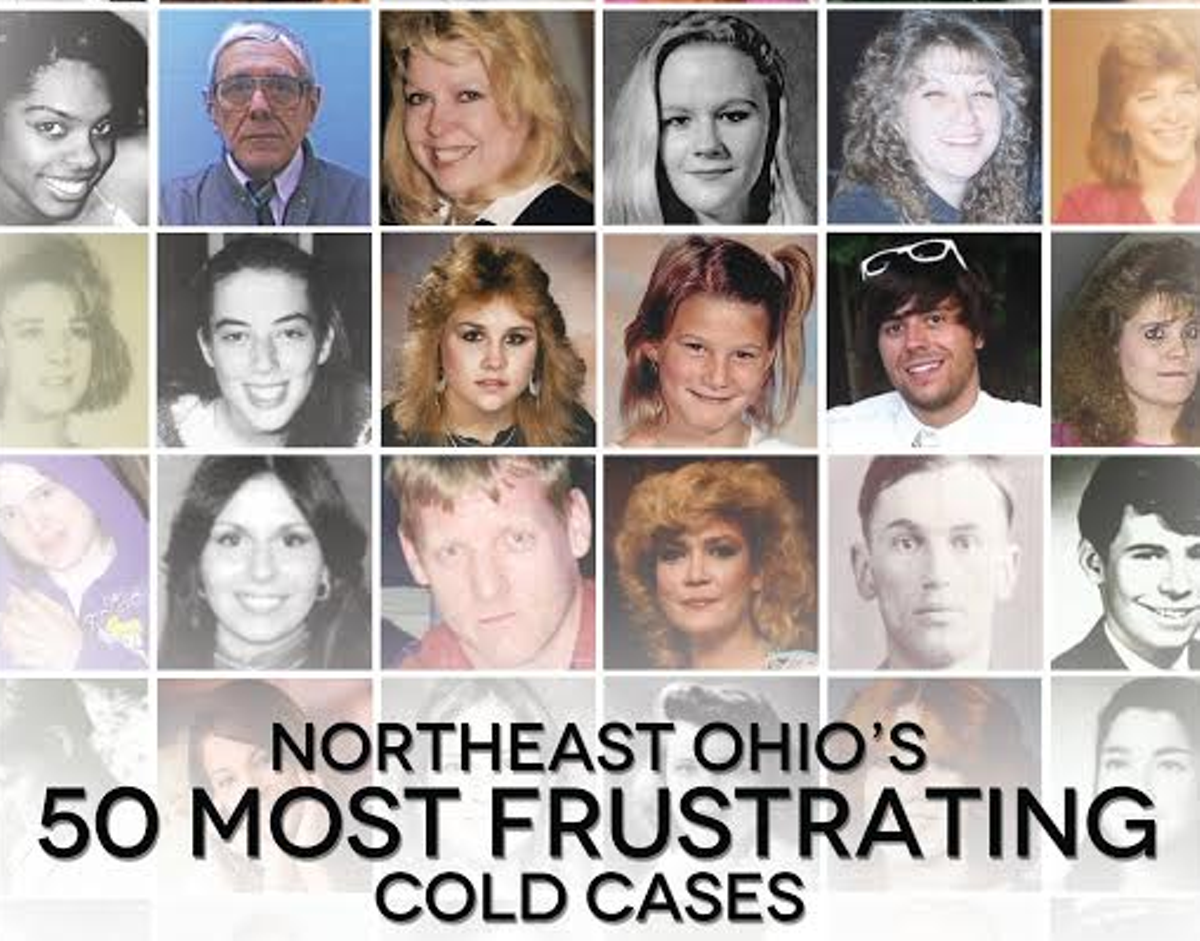 The Mystery: 14-year-old cheerleader Angela Hicks disappeared while her mother was at work. The only thing missing when police searched her room was a duffle bag she kept her Barbie dolls in. All of her shoes were found in the home. Angela's 21-year-old stepfather, Sam Legg, claimed he saw her leave the house before her mother returned. Angela's body was later found near an old barn by Midway Mall. A short time later, her mother divorced Sam and they both moved out of state.

The Mystery: Tiffany Papesh, 8, was last seen carrying hamburger buns, walking away from a convenience store toward her family's house, at 2:45. Her body has never been found. A man named Brandon Lee Flagner was actually convicted of her murder, after confessing to the crime, in 1983. But he later recanted the confession, stating that he wanted to stay in prison, and police no longer believe he was responsible for her abduction.

27. Who Are the Serial Rapists on Cleveland's East Side?

The Mystery: When Cuyahoga County finally got around to testing their backlog of rape kits, they discovered that many of the unsolved crimes were linked by DNA. In fact, prosecutors believe there are more than 200 men who are local serial rapists. You read that right. One as-yet-unidentified man, dubbed John "Countdown" Doe, was responsible for at least six rapes from 1993 to 1994, that occurred near East 55th.

The Mystery: Barbara Blatnik was a bright-eyed 17-year-old student at Erieview Catholic High School in 1987. The evening of Dec. 20, she called her father from a party on Turney Road and said she would be leaving soon. In the morning, her parents discovered that she'd never come home. Her nude body was found 30 miles away, near Blossom Music Center. She had been raped and strangled.

The Mystery: Charles Clark, 35, was standing in his kitchen, opening a can of pumpkin for Christmas dinner, when someone shot him through the window, killing him. Clark had four kids, a nice wife, and was a leader with the Boy Scouts. Who'd want to kill him? Detectives soon learned that his wife, Lois, was having affairs with six different men, one of whom was a man named Floyd Hargrove, who'd received a sharp-shooting medal in the service. Hargrove was charged with the murder but was acquitted by a jury.

The Mystery: Judge O'Donnell parked his state-owned car in the Flats and left a briefcase and $18,000 in cash in the back seat. Oddly enough, someone took it. After he reported the crime to police, the Plain Dealer contacted him. Instead of answering questions, he released a statement, saying the large sum was from his personal savings. A 2006 report by the New York Times suggested O'Donnell usually keeps a better eye on money; He has ruled in favor of campaign contributors 91 percent of the time, more than any other justice.

The Mystery: 10-year-old Debbie Smith disappeared from a street fair in Massillon in the summer of, 83. A man in a canoe found her body on the banks of the Tuscarawas River two weeks later. She had been raped and stabbed to death. Detectives found wax on her body. They would later trace the wax back to a brand of candles found in the home of convicted killer Bob Buell. However, strong evidence suggests Buell did not act alone and may have been training a sadistic apprentice. Buell was never charged with Debbie's murder. He was executed in 2002. The case remains open.

33. What Happened to Jonni Clemett?

The Mystery: Walking back from the Indians/Tigers game, Clemett made it all the way back to her car, which was parked beside the Little Bar, downtown, before she disappeared. She worked at Harpo's Sports Bar in Strongsville at the time and had previously worked at Shooters. Since she did not take any personal belongings and has never used her credit cards since, police suspect she met with foul play.

The Mystery: A week before the gallery closed, someone broke into True Art and made off with 33 paintings, as well as a computer, stereo, and phones. The paintings were not insured and nobody could figure out how the thieves removed the large paintings through a 2-by-3-foot hole they punched in the window; the gallery doors were still locked.

35. What Happened to Elaine Ford?

The Mystery: Elaine Ford is one of the many missing women we never heard much about. She was 29 years old when she was last seen in Cleveland, in 1990. She was never heard from again. She was a short African American who wore a Jheri-curl wig. She also had a rather large knot on her neck.

The Mystery: For weeks, there were signs that someone was entering 30-year-old Rene Wise's apartment on Cleveland Road, in Suffield, when she was not at home; muddy footprints in the kitchen, missing change. She filed a report with the police. Then, one night she returned home and someone beat her and strangled her to death. Her life was about to change for the better; She was engaged to be married and was about to become a fire fighter. Some mysterious intruder cut that short.

37. Where is Wayne Griffith?

The Mystery: Last seen in Ashtabula, 49-year-old Wayne Griffith was planning a trip to Melbourne, Florida, when he disappeared. Neither Griffith nor his gray, 1984 Ford conversion van was ever seen again. He has a tattoo of the Tasmanian Devil on his right arm.

The Mystery: 31-year-old Dan Ott was about to move to Michigan to work at a greenhouse. Most of his belongings were already packed up and he was sleeping on an air mattress with his girlfriend when a masked man dressed in camouflage broke into their house on Claridon-Troy Road. The intruder bound Dan's hands together with duct tape. When Dan tried to fight back, the masked man shot him in the chest with a shotgun and fled the scene. Some investigators believe Dan's death was the result of mistaken identity, after a hitman was sent to kill another man named Dan Ott.

39. Where is Michael Hodge?

The Mystery: Last seen riding a blue bike near West 172nd Street and Puritas, at 4:30 a.m., 39-year-old Mike Hodge disappeared without a trace. Hodge worked as a roofer and landscaper and was missing his four front teeth.