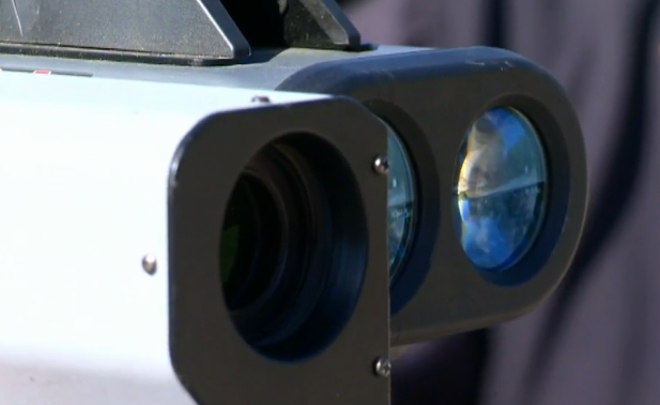 Speeders, beware! A new officer manned DragonCam installed along Interstate 76 is coming for your lead foot, and your wallet. (We hope you read that in your best local TV news anchor voice.)

In just the first 20 days since Norton, Ohio, has been using a manned speed camera they've issued 3,219 citations, according to the Akron Beacon Journal.

At roughly $200 a pop, that means Norton has issued $643,800 in collectible civil fines in less than three weeks, and that's just with the camera operating three hours a day six days a week. At this rate, it will only take 32 days for the city to break $1 million dollars in fines.

The speed limit on I-76 in Norton is usually 65 mph, but with construction currently underway, the speed limit is 55 mph. Police are issuing tickets to anyone caught going 65 mph or faster, and roughly 70,000 vehicles use the highway each day.

Norton implemented the use of the DragonCam last month in an attempt to slow down motorists and reduce the number of crashes on the highway, as it's been under construction since 2016 and sparked a jump in accidents in each direction. The six-mile stretch in Norton had 147 crashes last year, a significant spike from the 83 crashes in 2016.

Of course, people are upset about getting ticketed by the DragonCam and have accused the city of trying to generate revenue, but part of the deal with DragonCam's parent company, Blue Line Solutions, is that the program will end when the construction ends on the highway, which is sometime next year. The city will also stop using the DragonCam when the construction season winds down for winter and the concrete barriers are removed. The camera will return in the spring when construction season begins again.

The agreement also calls for the first $250,000 collected to go to the police department to pay for the program and school resource officers, and any additional funds to go toward street improvements.