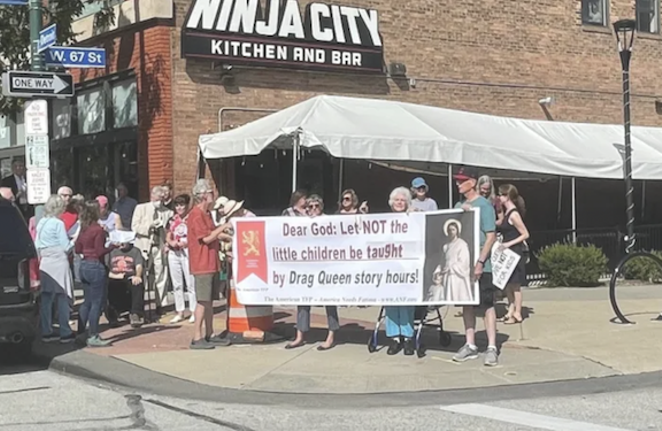 
Nearly 20 individuals showed up on Saturday at Cleveland’s Near West Theatre to protest the latest installment of Drag Queen Story Hour.

Hosted by well-known Cleveland entertainer Veranda L’Ni, Drag Queen Story Hour has been hosted at this location for two years. Children in attendance are gifted books to take home with them.

The protestors were affiliated with America Needs Fatima, a Pennsylvania-based nonprofit that proclaims that drag queens are straight from the devil and compares Drag Queen Story Hours to child abuse.

On Saturday, the protestors displayed banners and attempted to engage passersby in the bustling Gordon Square Arts District. Their protesting location was directly across the street from the LGBT Community Center of Greater Cleveland.

Although there were 48 registrants for this Drag Queen Story Hour event, 30 were in attendance. Representatives from the Near West Theatre said they are currently trying to determine if any families were frightened off by the protestors outside the theatre.

Individuals driving through the busy neighborhood yelled at the protestors to go home. Witnesses say a local business owner parked his car in front of the protestors and set off his car alarm to drown them out.

In a Facebook Live on Saturday, Veranda L’Ni vowed her resolve to continue the event and thanked the community for coming together to stand with the event: "We’re going to keep reading stories of acceptance and inclusion and fun and silliness and dancing and having a great time. Thank you to the parents and guardians who bring their kids to this program [all about]sharing the love and telling them it’s ok to be themselves."

This same Drag Queen Story Hour was the target of unsuccessful-Senate-candidate Josh Mandel, who threatened the event in December via his Twitter account.

Near West Theatre executive director Michael Obertacz underscored the importance of the event.

“Our program presents stories of acceptance and tolerance and everyone goes home with a book to read together as a family promoting early childhood literacy,” said Obertacz. “Near West Theatre is proud to partner with the national 501c3 Drag Queen Story Hour, Veranda L’Ni and her many compassionate and talented performers to create an inclusive, loving and safe space for children and families.”