The quest to clear out Lorain Avenue's prostitutes meets a pesky foe: The Constitution. 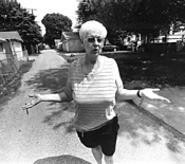 Walter Novak
Shirley Lester and her 12-year-old grandson caught a hooker in the act.
It's 7:40 a.m. on the corner of Lorain and West 53rd. Birds are chirping, children are pedaling their bikes, and Fleetwood the pimp is macking.

"Yo, what's up? I trick bitches. That's my girl," he says, pointing to a frumpy 19-year-old who calls herself Babydoll.

"Most of them come on the way to work," says Fleetwood, a thin man with a grizzly beard and nonstop patter. "You see all these guys in these cars?" he asks, pointing to the stream of commuters. "They're all looking for a headjob."

A Latino man lopes past and hands Fleetwood a roll of cash.

"Muchas gracias!" Fleetwood calls after him.

Asked what the money was for, Fleetwood feigns ignorance. "I don't know the man," he says with a sly grin. "Never seen him in my life."

It's exactly the sort of cockiness that frustrates residents here. It's also what prompted Councilman Matt Zone to push through a law that allows police to arrest hookers for actions as subtle as making eye contact or waving hello. But even residents eager to see their streets cleaned up wonder whether Zone's law will pass constitutional muster.

There's no question Lorain Avenue prostitutes show little fear of arrest. Hookers have gotten so brazen, they enter apartment buildings, unscrew a hallway lightbulb, then ply their trade on the floor. When residents take action -- by writing down a john's license plate or letting barking dogs out -- prostitutes have the nerve to complain that it's bad for business. "The dogs' barking distracts their customers; they've told us that," says Carol Crockett, who lives near West 81st Street.

And if you're picturing Julia Roberts in a short skirt and thigh-highs, you're sadly mistaken. "These girls are not pretty," says Zone. "Man, they are rough."

Crockett says she's afraid to let her six-year-old granddaughter play alone out back. Her yard adjoins an alley that's a natural place for prostitution. Stacks of old tires, a battered recliner, and overgrown brush provide ample privacy. Some mornings, used condoms litter the alley. Crockett's afraid her daughter will pick one up. "You don't know what's in it," she says. "You don't know what diseases."

Her neighbor, James Stokes, says he once stumbled on a hooker having sex on his porch. Several months ago, his sister-in-law called and told him to look out his window. He saw a thin, sandy-haired woman trying to entice men to pull over. "She had her shirt up and her skirt up, showing everything," he says. "I'm glad my kids weren't up at the time."

Shirley Lester, a tough-talking grandma who lives on West 50th Street, was driving down an alley with her 12-year-old grandson when they saw a man sitting in a parked car.

"I knew what was going on," she says. "I honked the horn. Her head came up. He straightened up. She opened up the car door and spit out."

Shaking her head in disgust, she adds, "And here's the good part: When I called police, they said she was from Elyria. They knew who she was!"

Police seeking to arrest hookers have been handcuffed since a 1999 appeals court ruling struck down the city's loitering-for-prostitution law. The defendant, Trina Mathis, pleaded no contest, was found guilty, and sentenced to a $250 fine and 180 days in jail. But her appeals attorney, Kenneth Rexford, argued that the law was too broad and could be used to prosecute women for something as basic as providing directions to motorists or waving hello.

The court agreed and ruled the law unconstitutional. The problem, the court said, was that the law was too vague. "It didn't give people a clear enough idea about what they couldn't do," says Jonathan Entin, a constitutional law professor at Case Western.

Loitering for prostitution arrests plunged from 414 in 1999 to none in 2001. Police could still arrest prostitutes for soliciting, but savvy hookers knew how to stay out of jail. "They're not going to flag me down while I'm driving down the street in a black-and-white," says Officer Leroy Brinkhoff, who staffs a police mini-station on Detroit Avenue.

Councilman Zone fielded dozens of complaints about prostitutes, even before he took office earlier this year. So he turned his attention to a decidedly unsexy arena of law: the traffic code.

The city had an ordinance against standing in the street and stopping traffic "by hailing, waving, or making other bodily gestures." Zone reasoned that if the law were extended to include sidewalks and treelawns, it would cover the prostitutes on Lorain Avenue.

City council unanimously passed his legislation June 10. Breaking the law is now punishable by a fine of at least $500. Yet experts wonder if this law has the same Achilles' heel as the one that was struck down. As written, the new law may be vague enough to make hailing taxis an offense, says Professor Entin.

Even the residents it's designed to help question whether it can survive a court challenge. "I think the concept is a good idea," says Bob Tucker, who owns a Lake Avenue apartment complex. "I'm wondering how civil rights are playing into that."

His tenant, Nicole Brimer, agrees. "If I see you down the street . . . I can't even wave hi to you?" she asks. "It sounds like it's going to be another bullshit law."

Councilman Zone provides a graphic illustration of the law's ambiguity during a tour of Ohio City. Driving through the intersection of Lorain and West 44th, he spots a woman wearing a skimpy black shirt and red-hot lipstick.

"There's a strawberry," he says, using slang for a woman who hooks for dope. "Did you see the way she gazed into our car? She looked me dead in the eyes and gave me that signal, that nod of the head."

It was so subtle, it would be invisible to all but the trained observer. Yet Zone says if the woman did it again, she could be arrested under his new law.

"I guess it's a judgment call," Zone says. "But I have total faith and confidence in our police to make sure they're using good judgment when they use this code in arresting people."

Professor Entin says the law may survive because the language isn't as open-ended as in the previous ordinance. "Here, they've pretty much defined what they're prohibiting," he says. "I think the city is going to have an easier time defending this one than they did the last one."

Yet Rexford, the Legal Aid lawyer who helped get the loitering-for-prostitution law struck down, offers a bleak assessment. While the new ordinance solves some of the vagueness problem, it still outlaws "too much inherently innocent conduct," he says.

"It prohibits a lot of stuff that people do in the summer. It would criminalize such activities as, I don't know, a church group doing some sort of car wash. I remember seeing a whole lot of judges standing out and waving to cars when they were running for office."

Even beyond the constitutional implications, using the traffic code against prostitution presents another thorny issue, says Rexford. "If a city enacts legislation that is traffic-related, it has to either be uniform across the state or there has to be posted signs. And I'm curious as to whether the city is going to start posting signs."

Rexford's opinion is not to be taken lightly. He recently managed to knock down the state's importuning law, which criminalized unwanted sexual advances toward someone of the same gender. He predicts Zone's law will meet a similar fate. "If it's going to be attacked, which undoubtedly it will be, it will probably come down."

Fleetwood the pimp is not too worried. "It'll work for a minute, then they'll have to turn around and get rid of it," he says, invoking an inventive line of defense. "It violates our First Amendment rights: freedom of speech, press, and all that other shit."

But on this Thursday morning, there's more pressing business at hand. He squints up Lorain Avenue at his gaggle of hookers. "Right now, I gotta go up here and talk to my ho's," he says. And with that, he saunters away.

Fare Evasion in Cleveland: What It Is, How Often It Happens, and Who Is Getting Charged