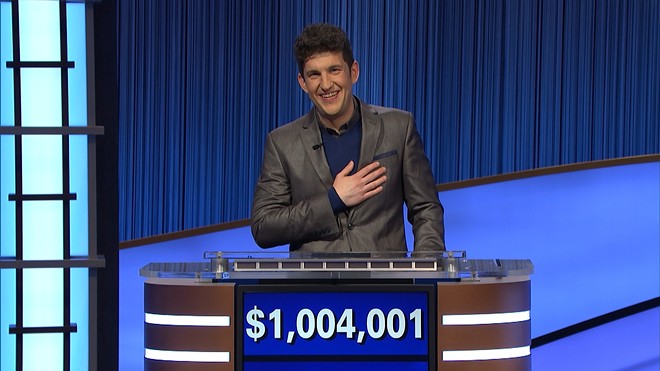 “This was beyond my wildest dreams going in,” said Amodio in a press release. “I knew it was a possibility, but I thought it was a very remote possibility, and to have it actually happen is unbelievable.”

Amodio's reign began way back in the spring — Jeopardy! tapes all its weekly episodes in one day and broke for the end of season 37 in May — and has lasted six hosts, two seasons and one major scandal.

He spent the summer break back home in Cleveland at his parents' house studying topics he didn't feel too confident about.

“Where I know I’m weakest is pop culture, and that meant that I was able to be productive this summer by sitting down and watching a lot of recent Netflix stuff and listening to top Billboard songs that I would not normally be giving the time of day,” Amodio told The Ringer. “I was consuming pop culture like a teenager who was in the middle of an angsty period.”

Amodio, despite his record winnings and winning streak, believes the game is "really hard," even as he puts together staggering, dominating performances.

“It’s a miracle that anybody ever wins multiple games,” he told The Ringer's Claire McNear.

His ascension to lofty Jeopardy! heights has come at an opportune time as the game show attempts to put the Mike Richards tenure in the rearview mirror. Meanwhile, Amodio is reckoning with the fame the show has brought him and the possibility of the tide turning.

"I generally don’t like my time in the sun, so it’s been strange to get interview requests and hear from people who I haven’t heard from in a long time. Random strangers are emailing me just from finding my email address online. I’ve been getting a ton of attention. Maybe you get used to it over time, but it hasn’t come yet. I’m tickled and a little bit uneasy with all of it. Many Jeopardy! contestants have messaged me with congratulations," he told Vulture in August. "I worry about becoming a bit of a villain; a Death Star of someone who just keeps winning. You accumulate reasons to not be liked, you know?"

The Yale PhD student should have plenty to cover tuition and then some at this  point.

Find out if Amodio continued his winning ways tonight.