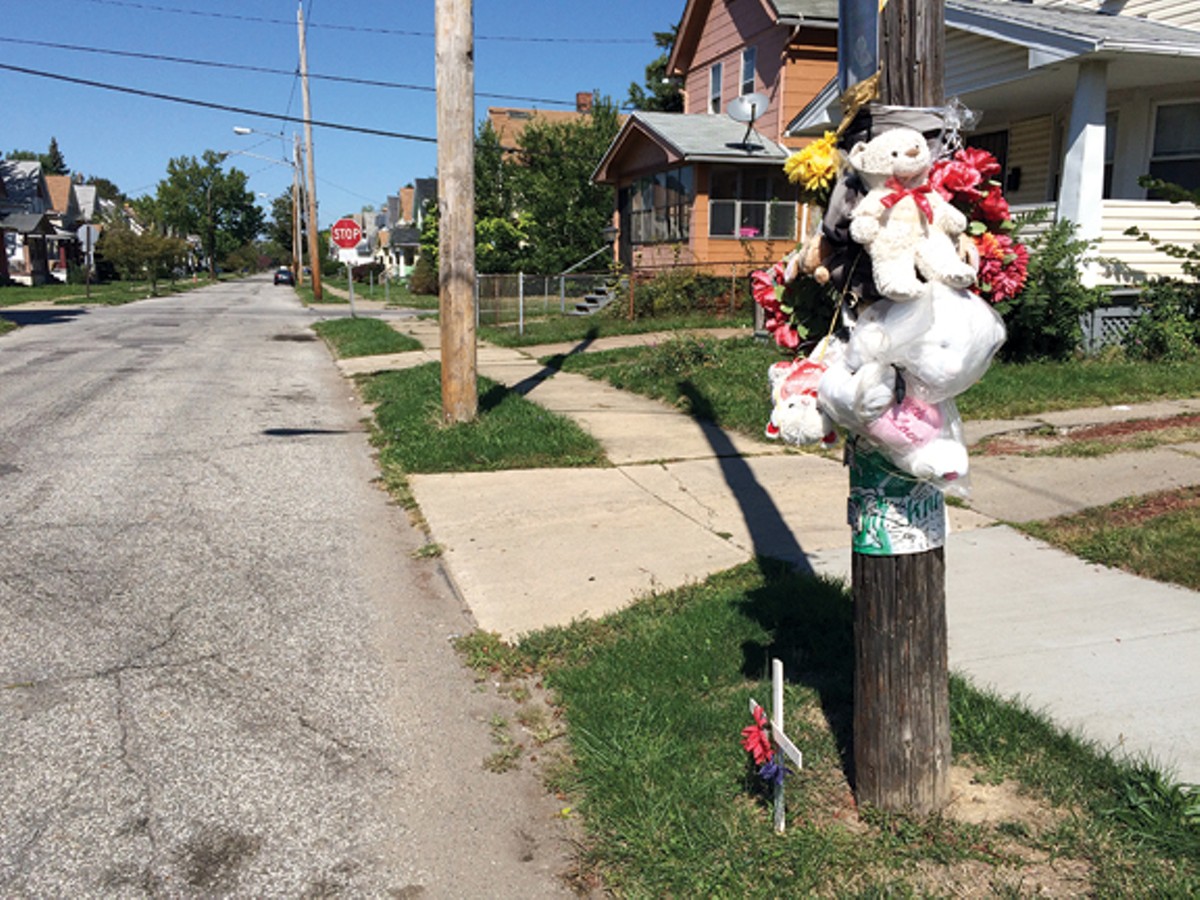 "The gang violence that's been going around affects the business completely. It's affected my business dramatically," Moustafa says. "Especially my night business. My night business used to be my backbone. I'm hurting real bad. It's getting to the point where I don't think I can go much longer. It's losing money right now. I put a lot of money in there, but I didn't invest all that money to lose."

Moustafa opened the gas station just two years ago, cleaning up a formerly blighted central part of the neighborhood.

"I started off OK, and it started getting better. Then this happens," Moustafa says. "For the past, what, four months? It's just nosediving.

Al Rollins has owned Upper Cutt on Union Ave. at East 105th since 1975. It's the quintessential neighborhood barber shop, with quiet soul playing from a small stereo and pictures of people, celebrities and otherwise, adorning the walls. On this afternoon, one man is inside getting a quick buzz. Most days, when the weather's fine and business is relaxed, Rollins sits on a small crate outside and plays his soprano sax. That's what he's doing when Scene asks him how things are going around here; business is relaxing a bit too much these days.

He says it didn't used to be like this -- the rampant shootings, the innocent victims, post-mortem balloons on every damn near every street.

"This is the 'hood, and I'm not saying that's what you should expect," Rollins says. "It's something that we're not really used to either. Every post you see have balloons and liquor bottles, pop bottles, candles. Nobody's used to that. Not really much can be said; until something different happens, I don't think it's something we should settle for. But what can you say? Ain't nothing you can say. The only thing I do is keep on playing, and keep myself and my family in line.

"The neighborhood's changing as we speak," Rollins says between bursts of melody.

A few years back, Rollins found himself dodging bullets right outside his barber shop. "I was sitting right here, got caught up in some crossfire," he says. "It destroyed my horn. So hearing about any of that [violence] takes me to a certain place."

Still, Rollins isn't convinced more police officers are the answer here. He's not sure what it's going to take. "I mean, this situation, in the future we're going to have to come to some sort of conclusion," Rollins says. "It's getting closer to us. It's getting worse, because when we're not affected, it's people around us who are affected. Down the street, two robberies just the other day."

The next day, Scene catches up with Alfrieda Haywood, a school crossing guard outside Andrew J. Rickoff Elementary at Kinsman and East 147th. She's been posted up here for six years.

A lot of kids here walk to and from school, although Haywood says she's seeing more parents than ever showing up to drive their little ones.

She used to live around right around here, but she says the strains of the neighborhood drove her away: "It's been a lot of violence around here. I feel for the family of the little baby that got shot last week. There's something going around, and you gotta look for yourself and be observant."

Down at City Hall and at Cleveland Police headquarters, those in charge of public safety are grappling with an explosive issue from which there is no clear exit.

Hours prior to Aavielle Wakefield's death, Mayor Frank Jackson was at a ribbon-cutting for the Flats East Bank, demonstrating almost perfectly the dissonance between downtown's corporate power structure and the blind violence of the city's poorer neighborhoods. It's not an indictment of downtown or Jackson or developers, just context for what else happens inside the city's borders. By the time Jackson and Chief Calvin Williams arrived at East 143rd Street, a crowd was gathering. Williams wept on-screen. A memorial would slowly take form on the spot.

The next day, on Oct. 2, Williams discussed that most recent homicide to bring Cleveland to a halt. He stood in the police headquarters briefing room and explained that no leads emerged from the first night of the investigation. "We are getting tips in, and our officers are following up," he said. "But we need more. Our community needs to step forward."

Earlier this year, Williams' own brother was gunned down in a domestic dispute. It was a surreal moment, one that brought to city's woes to its police chief in a personal way: The chief was facing down the scourge of violence that had made its way into his own family.

Much like the whole of the U.S., the time between shootings in Cleveland is becoming shorter and more steeped in debate and reflection. Jackson, during that Oct. 2 news conference, drew a parallel between Cleveland's crisis and the mass shooting at Umpqua Community College in rural Oregon. Following that tragedy, President Barack Obama spoke about how terrifyingly routine this is becoming: the aftermath of violence is a regularly scheduled process.

So are the memorials, so is the grieving. Another day, another week, another family mourning, another vigil. Another time that Judy Martin addresses the friends and family of a loved one dead and gone.

"We've got to stop this," Martin says. "Or we're gonna be here every week, every month, every year."

Anyone with information relating to these crimes and others can anonymously call Crime Stoppers with tips at 216-252-7463.