Titillating Tidbits: Andre 3000 Brought His Flute to Cleveland, Plus a Legendary Black Cleveland Newspaper Reporter Gets His Due 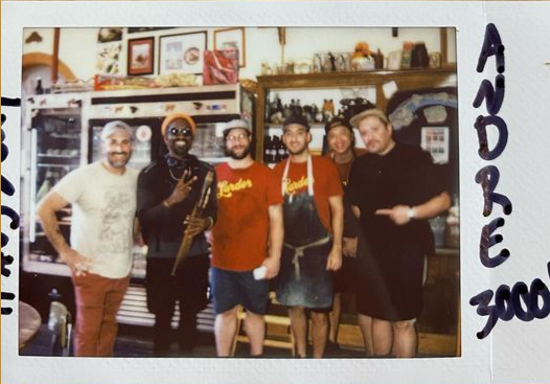 Andre 3000, who's been filming A24's "Showing Up" this summer, brought his cool-ass flute and chill vibes to Cleveland recently where he's also filming for "Wheat Germ/White Noise," the Netflix film starring Adam Driver.

The Outkast legend has been spotted all over downtown and the near west side, cheerfully posing for selfies with fans.

Andre 3000 came to my sisters store today… Flutw and everything 😭 pic.twitter.com/kIWpIvsavm

- Also on the celebrity front, Jim Nantz, whose in-laws live in Northeast Ohio and who belongs to The Country Club in Pepper Pike, was back in town this week to visit a different course: Clearview Golf Course, the first U.S. course wholly built and owned by an African-American.

From the Canton Repository:


Nantz knew the late Bill Powell, who 75 years ago became the first Black man to open a golf course he had designed and built when he opened Clearview.

"I was in attendance when Bill won the PGA's highest honor, the Distinguished Service Award," Nantz said during his visit Monday. "I was always aware of the history of Clearview.

"I met Renee (Powell) a number of times through the years. I always admired her so much. We ran into each other this year. It might have been opening day of the Masters.

Renee Powell was touched. She has been part of many annual outings at the course, but there wasn't one last year amid COVID-19. Nantz's offer led to Monday's golf scramble, "A Celebration of Clearview, with Jim Nantz."

For more on the course, which is a National Historic Site, check out the video below and a lovely deep-dive from The Undefeated published in 2016.


- Charles H. Loeb, the legendary reporter who spent 35 years at the Call & Post, got some long, long overdue national recognition last week in a piece by the New York Times titled "The Black Reporter Who Exposed a Lie About the Atom Bomb."

Loeb covered the end of World War II and the aftermath America's use of nuclear bombs on Hiroshima and Nagasaki for the National Negro Publishers Association. His dogged reporting, overlooked at the time because his articles appeared in Black newspapers, contradicted American propaganda and military claims, parroted in the New York Times and other national papers, that the bombs caused no lasting effects, and showed how radiation sickened and killed scores.

The whole piece is well worth your time.

- Never seen a tree do this before.

- Also from the Cleveland Remembrance Page, RIP to Kenneth “Hamma” Perry, a Kinsman mainstay and legend.


- Shit posting in the mayor's race is really heating up.

Following the Shontel Brown playbook to a T. https://t.co/N2NTimf7t3

50,000 + - Number of Northeast Ohio houses that lost power this week in the nasty storms, some of whom are still waiting to be reconnected.

$661,724 - Grant received by the city of Cleveland this week from the National Parks Service for a new park in Clark-Fulton near the rec center.

36% - Amount of Cleveland residents ages 12 and up who have received their Covid vaccination.

51% - Amount of nursing home and elder care workers in Ohio who have been vaccinated, the lowest rate in the country besides eight other states, all of which are in the south.

- Vintage photo of the week: