Video: Happy 35th Anniversary to the Disastrous Cleveland Balloonfest of 1986 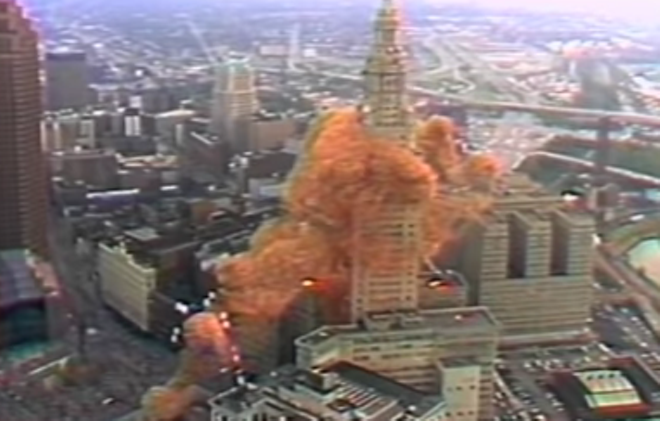 Thirty-five years ago next week, on Sept. 27, 1986, the United Way and the city of Cleveland released 1.5 million helium-filled balloons downtown in an attempt to set a Guinness World Record and kick off the non-profit's fundraising season in dramatic fashion.

"There is no mistake on the lake anymore," a giddy Lil' John proclaimed on local TV coverage as the colorful orbs lifted and engulfted the Terminal Tower.

He, of course, spoke too soon.

Decades later, a United Way spokesperson summed up how the spectacle unfolded pretty well and bluntly in an interview with the Plain Dealer.

"We would not do a balloon launch ever again," they said.

The reasons for that are multitudinous, and they were evident very shortly after the balloons headed skyward.

For starters, the balloons, going whichever way the wind might take them, went all over the place and came down as a stormfront rolled in. They shut down a runway at Burke Lakefront Airport. Many of them eventually drifted over water and littered beaches in Ontario.

More seriously, there were multiple accidents caused by drivers distracted by the balloons.

And most seriously, the U.S. Coast Guard, who on that day and at that time were searching for two missing fishermen, cited the thousands and thousands of balloons dotting the top of Lake Erie as a complicating factor in their mission. Both men would be found dead, and the widow of one would sue the United Way and reach a settlement later.

Another suit emerged from Geauga County, where a woman complained the balloons had landed on her property and "spooked her prize Arabian horses." The United Way would also reach a settlement with her.

In addition to the poor publicity and various issues it caused, the United Way's 1986 fundraising event was a failure in a more basic way — it lost money because of cost overruns.

Below, two short documentaries on the dismal, bungled, doomed affair cobbled together from archival TV coverage and other resources.