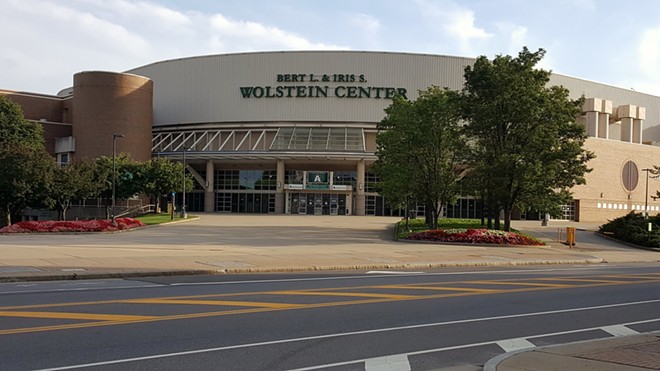 The White House along with state and local officials announced today that the Wolstein Center will be among the arenas and stadiums nationwide serving as FEMA-operated mass vaccination sites.

When it opens on St. Patrick's Day it's expected to administer as many as 6,000 vaccine shots a day, the Biden administration said.

The site was recommended by Ohio officials and selected by FEMA, in part, for its proximity to underserved populations and senior citizens. The new vaccine doses will be in addition to those at other Ohio vaccine distribution centers.

In a press release Friday morning, Gov. Mike DeWine thanked FEMA and said that, with the supply of vaccines increasing, now is the perfect time to launch a mass vaccination site of this kind. DeWine referred to the Wolstein site as a "long-term clinic" and said it would vaccinate more Ohioans than any other site to date, "particularly those in Ohio's most vulnerable populations."

The site will operate seven days per week and will be distributing the Pfizer vaccine to all eligible Ohioans for three weeks. Those who receive shots will then be able to get their second shot in the ensuing weeks. Those with transportation challenges can get free RTA passes or subsidized ride share services to the Wolstein Center by calling 2-1-1.

"To date, we’ve brought back retired doctors and nurses. We’ve developed — we deployed more than 1,500 federal medical personnel you usually see during natural disasters, from the Federal Emergency Management Agency — FEMA — and the Commissioned Health Corps at the Department of Health and Human Services, and the Defense Department, including the National Guard, with thousands of more to come," President Joe Biden said in remarks earlier this week. "We’re also increasing the places where people can get vaccinated. We’ve sent millions of vaccines to over 7,000 pharmacies to make it easier for folks to get their COVID-19 vaccine shot like they would their flu shot.  The federal government is also working with states to set up hundreds of mass vaccination centers in places like stadiums, community centers, parking lots that vaccinate thousands of people per day. My wife Jill and I just visited one in Houston last week. It’s incredible."

With the Wolstein Center and other additions, there will be at least 18 FEMA-backed mass vaccination sites around the country.

Ohio entered phase 1C and phase 2 in its vaccination plan this week, opening availability for Ohioans over the age of 60, those with qualifying health issues, and those who work in certain professions such as law enforcement or in funeral homes.

About 940,000 residents are now newly eligible to receive the vaccine.