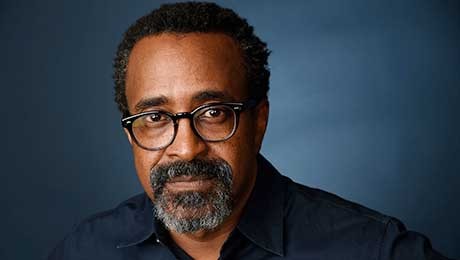 Hilarities.com
Tim Meadows.
Our weekly picks of the best things to do in Cleveland this weekend. Also check out our full Cleveland event calendar.

THU 07/07
Tim Meadows
The veteran comic served as a cast member on SNL for years. He's also appeared in a slew of films, including The Ladies Man, Grown-Ups, Benchwarmers and Semi-Pro. He comes to Hilarities tonight at 7. He performs at the club through Saturday. Check the venue's website for more info.
2035 East Fourth St., 216-241-7425, pickwickandfrolic.com.

Danjo Jazz Orchestra
The nearly 20 members of Danjo Jazz Orchestra will fill Jilly's Music Room with a "timeless big band sound and the power of horns, wind instruments and a top-notch rhythm section," as it's put in a press release. The 2022 residency will afford fans the group’s blend of jazz standards and originals on a monthly basis as the band tears it up on the first Thursday of the month. The performance begins at 7 p.m. It's free.
111 N. Main St., Akron, 330-576-3757, jillysmusicroom.com.

Grateful Thursday
At this monthly DJ event, Proof promises to take you back to the origins of file sharing. From 7 to 10 p.m., a DJ will play Live Grateful Dead performances captured on original bootleg cassette tapes. Drink specials will include $1 Miller Lite drafts, $3 Sierra Nevada drafts and a $7 Ramblin’ Rose cocktail. Food specials will include $3 Cuban Steam Buns and $5 Half Mile High Nachos.
2258 Professor Ave., 216-583-0551, proofcleveland.com.

The Stephen Philip Harvey Jazz Orchestra
SPHJO features a rotating roster of musicians throughout the Mid-Atlantic region. The roster for the Bop Stop concert features musicians from the Pittsburgh and Cleveland metro areas. As a collective, this roster of musicians has played with acts such as Slide Hampton, Joe Lovano, Dick Oatts, the Tommy Dorsey Orchestra and the Vanguard Jazz Orchestra. Tonight at 7, it plays a special release party at the Bop Stop. Tickets cost $25.
2920 Detroit Ave., 216-771-6551, themusicsettlement.org.

SummerFEST 2022 Concert Series
In response to the overwhelming support for last year's concerts, the Cedar Fairmount Special Improvement District is hosting concerts two nights a month throughout the summer. Tonight's concert takes place in the parking lot on Grandview (off Cedar and behind Firestone) from 6:30 to 8 p.m. In case of rain, the concert will take place the following Monday. Consult the website for a complete schedule and more info.
cedarfairmount.org.

FRI 07/08
Big Time Rush
This Nickelodeon Viacom Music Productions band formed ten years ago to perform on the TV show of the same name. After a brief hiatus, the group reformed last year. Dixie D’Amelio opens the show. The Forever Tour marks Big Time Rush’s first official tour since reuniting; it's been 8 years since the band was last together in official capacity. The concert begins at 8 p.m. at Blossom. Check the venue's website for more info.
1145 W. Steels Corners Rd., Cuyahoga Falls, 216-231-1111, livenation.com.

Something Rotten!
Set in 1595, Something Rotten! tells the story of two brothers who just happen to be the nemeses of a little-known Mr. William Shakespeare. After they hear that the future of theater will involve singing, dancing and acting all at the same time, the brothers set out to write the first musical. Tonight's performance takes place at 8 at the Beck Center for the Arts, where performances continue through Aug. 7.
17801 Detroit Ave., Lakewood, 216-521-2540, beckcenter.org.

Walkabout Tremont
A patriotic theme from Fourth of July carries over to this month’s Walkabout Tremont. There will be All-American food and drink specials, pop-up vendors along Professor Ave., Shanty Circus aerial acrobatics, and music by Alex Henry and Reverbious. The Tribe Ostara Tribal Belly Dance troupe will be on hand as well, and St. John Cantius Church will be open for tours. It all goes down from 5 to 9 p.m. Admission is free
walkabouttremont.com.

Wonderwall Flash Mob
Sofar Sounds Cleveland and the Rock Hall have teamed up for this flash mob event that will feature an ensemble performance of the Oasis hit "Wonderwall." Musicians should bring whatever instrument they want and singers should bring their voices. It all starts at 8 p.m. at the Rock Hall, and it's free.
1100 Rock and Roll Blvd., 216-515-8444, rockhall.com.

SAT 07/09
Biitchseat Album Release Show
The local indie rock act Biitchseat celebrates the release of its sophomore album, Float, with tonight's show at the Grog Shop. With the album, the band takes the sounds of ‘90s acts such as Liz Phair and the Breeders and tries to build upon those sounds to produce something appealing to twentysomethings. The concert begins at 8:30, and Runaway Brother and Wife Patrol open. Tickets cost $12.
2785 Euclid Hts. Blvd., 216-321-5588, grogshop.gs.

Cleveland's Screaming: The Final Chapter
Local punk fan and promoter Jim Lanza has hosted periodic revival shows over the years as he reunites defunct local bands. He's behind tonight's Cleveland's Screaming: The Final Chapter, an event that features the world premiere of the lost Mike Hudson (The Pagans) film This is ELVIS' Birthday '92. Before and after the movie, the show will also feature a reunion show by the Cleveland organ-punk band Archie and the Bunkers. Detroit psychobilly rockers the Ruiners will perform. It all starts at 8 p.m. Tickets cost $15.
15711 Waterloo Rd., 216-383-1124, beachlandballroom.com.

Grand Slam Beerfest
You can sample more than 200 local and craft brews as well as new craft wines and spirits at this annual event that comes to Progressive Field today. A day session begins at 1 p.m., and a night session begins at 7 p.m. Consult the website for ticket prices and more info.
2401 Ontario St., 216-420-4487,  grandslambeerfest.com.

SUN 07/10
An Evening with Dave Mason
Traffic keyboardist Steve Winwood reportedly once complained that guitarist Dave Mason thought of the group as his backing band and would bring the guys finished songs and then expect them to play them exactly as they were written. For his current tour, Mason will play a selection of tunes from throughout his lengthy career. Tonight's show begins at 7:30 at the Kent Stage.
175 E. Main St., Kent, 330-677-5005, kentstage.org.

Paul Simon Songbook
Tonight at 7 at Blossom, the Cleveland Orchestra plays music by multi-Grammy-winning singer-songwriter Paul Simon. Expect to hear tunes from his years with Simon and Garfunkel as well as from his solo albums like Graceland. Consult the orchestra's website for more info.
1145 W Steels Corners Rd., Cuyahoga Falls, clevelandorchestra.com.

Tom Thakkar
This comedian has written sketches and jokes for SyFy’s The Movie Show and has served as the co-host of You Up with Nikki Glaser on SiriusXM. Currently, he hosts the podcast Stand By Your Band. He comedian performs tonight at 7 at Hilarities. Check the club's website for more info.
2035 East Fourth St., 216-241-7425, pickwickandfrolic.com.