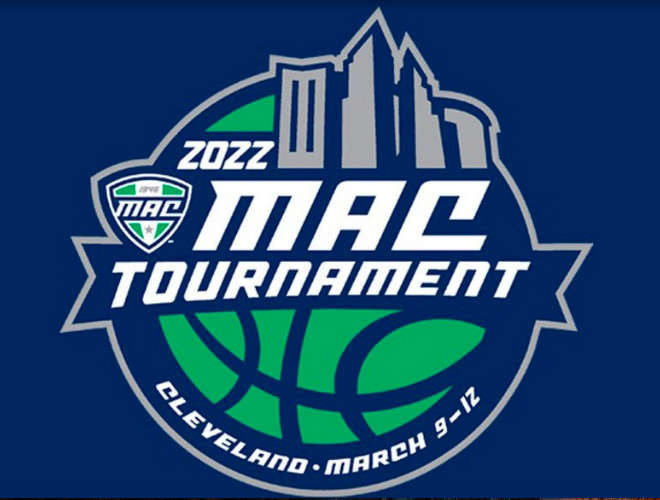 Rocketmortgagefieldhouse.com
The 2022 MAC Tournament comes to Rocket Mortgage FieldHouse.
Our weekly picks of the best things to do in Cleveland this weekend. Also check out our full Cleveland event calendar.

THU 03/10
2022 MAC Tournament
Many teams in college basketball's biggest conferences will make it to the NCAA basketball tournament whether or not they win their conference tournament. In the Mid-American Conference, teams must win the conference tournament to get selected to play at the Big Dance. At least that's traditionally been the case. So expect the mid-sized schools from the region (Kent State, Ohio University, Toledo, Akron University, etc.) who'll duke it out at this year's tournament to engage in some real winner-take-all battles. Today at 11 a.m., both men's and women's teams will play at Rocket Mortgage FieldHouse, leading up to the championship games on Saturday.
1 Center Court, 216-420-2000, rocketmortgagefieldhouse.com.

Antigone
Cleveland Play House’s 2020 production of Antigone was in its second week of rehearsal when it had to be cancelled due to the Coronavirus pandemic. Now, it returns for a run at the Outcalt Theatre. It features Mariah Burks as Antigone and Vanessa Morosco as Creon. Tonight's performance begins at 7:30, and performances continue through March 27. Tickets cost $25 to $75.
1407 Euclid Ave, 216-241-6000, playhousesquare.org.

Drink and Draw with Dr. Sketchy Akron
Founded in 2005 in a dive bar in Brooklyn, Dr. Sketchy’s has now spread to more than 100 cities around the world. Dr. Sketchy Akron, a monthly drink and draw event that takes place on the second Thursday of each month at Jilly's Music Room in Akron, gives patrons the opportunity to "draw glamorous underground performers in an atmosphere of boozy conviviality." The fun begins at 7 p.m.; it costs $10 to draw. second Thursday of every month.
111 N Main St., Akron, 330-576-3757, jillysmusicroom.com.

New Soft Shoe
Nine years ago, on what local singer-songwriter Brent Kirby calls a drunken dare, a group of Cleveland friends and musicians showed up at the Happy Dog to play a couple sets of tunes by the late, great Gram Parsons. Dubbed the New Soft Shoe, the group has been at it ever since, spreading the gospel of what it refers to as "Gram's Cosmic American Music." Anything that Parsons played, the New Soft Shoe covers. As a result, the group plays tunes from the International Submarine Band, the Byrds and Flying Burrito Brothers. It also plays songs from Parsons' solo album GP/Grievous Angel. Tonight at 8, the band performs in the Waldorf Hall at Forest City Brewery. Tickets cost $5.
2135 Columbus Rd., 216-228-9116, forestcitybrewery.com.

Pretty Woman
Based the film by the same name, the musical Pretty Woman comes to Connor Palace tonight at 7:30. It stars Broadway superstar and Tony Award-nominee Adam Pascal as Edward Lewis and Olivia Valli as the "charming and charismatic" Vivian Ward. Performances continue through March 27. Tickets start at $10.
1615 Euclid Ave., 216-241-6000, playhousesquare.org.

FRI 03/11
Fish Fry-Days
Through the month of March and for the first few weeks of April, Prosperity Social Club hosts its fish fry, dubbed Fish Fry-Days, every Friday from 11 a.m. to midnight The special Lenten menu includes the “Big Fish," which includes four pieces of hand-dipped beer battered Haddock with creamy slaw, mac and cheese, tartar and lemon, and the “Gotta Haddock," which includes everything that comes with “Big Fish” but adds a cup of scratch-made creamy clam chowder and two pierogies with sauteed onions and sour cream. Whatever the fish dish, the pub can offer a drink pairing. Sibling Revelry Brewing’s “Gotta Haddock,” a clean, light-bodied pilsner bearing the signature fry’s name, will be available on draft, or diners can choose from an array of cocktails, Belgian beers, stouts, and sours.
1109 Starkweather Ave., 216-937-1938, prosperitysocialclub.com.

Mo'Nique
Comedian Mo'Nique is husky and Southern and proud of it. She brags that she'll eat a whole fresh pig. Mo's other topics of humor include her divorce from her "leprechaun" ex (dude was too short and had designs on her lucky charms anyway), her very "nice" son and her kids' fear of playing Twister with their fat mom. Some of the stuff she talks about borders on the serious (like her mom life and why she moved to a white neighborhood), but she manages to find the funny in every situation life throws at her. She performs at 7:30 and 10 tonight and at 6:30 and 9 tomorrow night at the Improv. Consult the venue's website for more info.
1148 Main Ave., 216-696-IMPROV, clevelandimprov.com.

Walkabout Tremont
Walkabout Tremont, which takes place on the second Friday of every month from 5 to 9 p.m., showcases the best of this smart neighborhood, with art openings, extended hours at galleries and shops, restaurant and bar specials, street performers, live music, pop-up vendors, neighborhood walking tours and much more.
experiencetremont.com.

Wu Wei
A sheng soloist who has helped to develop this 4,000-year-old Chinese wind instrument into an “innovative force” in contemporary music, Wu Wei studied the sheng at the Shanghai Conservatory of Music and was a soloist with the Shanghai Chinese Orchestra before studying at the Hanns Eisler Academy of Music in Berlin, where he's now based. His performance tonight at 7:30 at the Cleveland Museum of Art will include traditional and contemporary Chinese music as well as masterworks of the European baroque period. Check the museum's website for more info.
11150 East Blvd., 216-421-7350, clevelandart.org.

SAT 03/12
Aminé
Known for his clever lyrics, rapper Aminé comes to House of Blues tonight as part of a tour in support of his latest effort, TWOPOINTFIVE, which features special guests AJ Tracey, Cochise and 454. The album draws from club and dance music, influences that the rapper distills nicely on standout tracks like "Charmander," "NEO" and "Van Gogh."The show starts at 7 p.m. Consult the House of Blues website for more info.
308 Euclid Ave., 216-523-2583, houseofblues.com.

Shoeless: A Musical Tale of Cinderella
Tonight at 8 at the Mimi Ohio Theatre, North Coast Men’s Chorus presents the world premiere of a staged musical concert of the fairy tale Cinderella. Cinderella, the Prince, her evil Stepmother and her two stepsisters all make appearances along with the Fairy Godmother. A performance takes place at 3 p.m. tomorrow at the Mimi Ohio Theatre.
1511 Euclid Ave., 216-241-6000, playhousesquare.org.

Tri-C High School Rock Off
All genres of high school bands and musicians will be represented at this annual event that returns after taking a year off due to the pandemic. Some 30 bands will compete to see who's the "best in the land." A preliminary round takes place tonight at 6 at the Rock Hall.
1100 Rock and Roll Blvd., 216-515-8444, rockhall.com.

SUN 03/13
Monsters vs. Rockford IceHogs
The Monsters take on the Rockford IceHogs today at 3 p.m. at Rocket Mortgage FieldHouse. It's both Jewish Heritage Day and Monsters Family Day. In addition, the first 5,000 fans will receive a Monsters trading card set. Check the arena's website for ticket prices and more.
One Center Court, 216-420-2000, rocketmortgagefieldhouse.com.

Rick Wakeman
On a trek he’s dubbed the Even Grumpier Old Rock Star tour, keyboard wiz Rick Wakeman (the Strawbs, Yes) returns with what a press release describes as a program packed with "virtuosic piano performances and hilarious anecdotes" inspired by his 50-plus-year career. The show starts at 8 tonight at the Kent Stage. Check the venue website for more info.
175 E. Main St., Kent, 330-677-5005, kentstage.org.