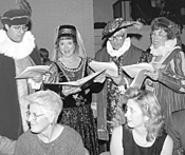 Stan Hywet's Madrigal Dinners are feasts fit for a queen. And sure enough, guests are greeted at the front door by Buckingham Palace-style guards. A trumpet fanfare then ushers the hungry into the dining room, where Queen Elizabeth I and her royal court make their grand entrance to the head table. Madrigal singers and a brass quartet strike up a 15th-century yuletide repertoire; then a ceremonial boar's-head-and-flaming-dessert procession formally marks the start of the holidays.

While the choir rejoices and the band serenades, some serious Henry-the-Eighth-style chowing begins. The main course consists of roasted pork loin with nutmeg-spinach stuffing; on the side are sweet potatoes, a French bean casserole, and a tossed salad with roasted-garlic-ginger-yogurt dressing. "Some of this stuff sounds weird, but it's really delicious," says Stan Hywet's Melanie Korman. Madrigal Dinners happen from 6 to 9:15 p.m. Thursday through Sunday at Stan Hywet Hall & Gardens, 714 North Portage Path in Akron. Tickets are $44 to $55. Call 330-836-5533 for more information. -- Cris Glaser

Nancy Prudic is no stranger to censorship. No surprise, considering that her art consists of naked human figures, which have been covered up and vandalized in past shows. For her contribution to ShutUp: Censorship, Art, and Literature, Prudic uses skin-like materials and texts from Ginsberg and Nabokov. More than 20 artists are represented in the B.K. Smith Gallery's exhibit, which revolves around banned books. "In our day and age, censorship can be more passive," says artist Niko Angelis. "But it's just as effective."

Dott Schneider's "Mein Kampfortable: Armchair Hitlers" plays on Adolf's Mein Kampf. Censors are armchair Hitlers, she says, because they "have no control over their own lives, so they try to control the rest of us." ShutUp runs through December 5 at Lake Erie College's B.K. Smith Gallery (391 West Washington Street in Painesville). It's open 10 a.m. to 6 p.m. Monday through Friday and noon to 5 p.m. Saturday and Sunday. Admission is free; call 440-375-7461. -- Melody Caraballo

11/6-11/25The Matrix Reloaded was quite a visual feast -- never mind its plot holes and half-assed philosophizing by Keanu and crew. The Matrix Revolutions, the third and final film in Andy and Larry Wachowski's sci-fi series, resolves those lingering questions and settles, once and for all, the problem with the Machines. Monica Bellucci and Jada Pinkett Smith are both back, as is the menacing Agent Smith. Revolutions was shot at the same time as Reloaded, so it's as sleek and fast-moving as its predecessor. But with a supercool battle at its center, the series capper puts action before mind-expanding (and -numbing) discourse. Whoa. The Matrix Revolutions is playing everywhere. See Film for a review. -- Michael Gallucci

There are probably more self-help gurus out there than there are people actually in need of help. But none is bigger than Dr. Phil, the Oprah-approved chatterbox who finds a positive spin for even the bleakest situations. His thing is to tell folks to "get real," which he will certainly do at least three dozen times Friday at CSU's Convocation Center (2000 Prospect Avenue), where his Get Real Tour plays at 7:30 p.m. Tickets are $60 to $136; call 216-241-5555. -- Michael Gallucci