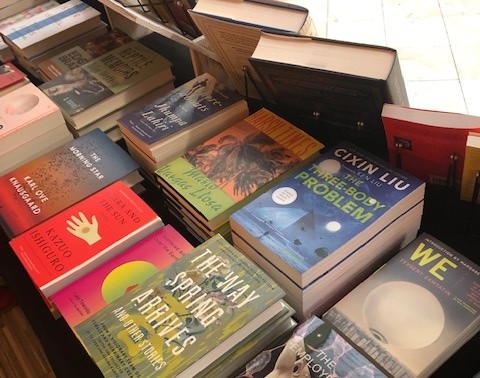 At a wine-and-cheese open house to commemorate the Grand Opening Thursday evening, owner Cathryn Spiegal-Bergman told Scene that she has long been a fierce advocate for world literature. She said she planned to center the translated works of women authors in the store, housed in the former site of Sushi 86.

"I'd say 99.8 percent of our inventory will be works in translation," Spiegal-Bergman said, "but I reserve the right to expand. We'll carry some local authors as well. It's a curated collection. If we like it, we'll carry it."

(As we spoke, a patron was purchasing Kent State, Derf Backderf's graphic novel about the May 4th, 1970 shooting.)

But she said that carrying women authors was a big part of the mission, to  encourage local readers to broaden their reading horizons and hopefully indicate to publishers that a growing market exists for this work.

She said she started Clevo Books — it'll be superfluous to note that the name is an homage to the city of Cleveland — to accelerate the process of getting works in translation to American readers, many of whom don't have access to world literature until a translated version is available. Spiegal-Bergman has worked in translation herself, as a freelance translator for German children's books and cookbooks.

As a publishing house, Clevo Books will focus chiefly on German translations, at least for now, but that, too, could evolve.

The store's inventory is modest and elegantly arranged, with an aesthetic borrowed from Sushi 86, (the permanent wall fixtures have been kept). Global fiction, children's fiction and graphic novels are all on offer. The store will be open Tuesday through Saturday, and Spiegal-Bergman said if she's not in the store's small office, she can likely be found working in a nearby coffee shop.

Sam Allard is the Senior Writer at Scene, in which capacity he covers politics and power and writes about movies when time permits. He's a graduate of the Medill School of Journalism at Northwestern University and the NEOMFA at Cleveland State. Prior to joining Scene, he was encamped in Sarajevo, Bosnia, on an...
Read More about Sam Allard
Scroll to read more Arts Stories & Interviews articles