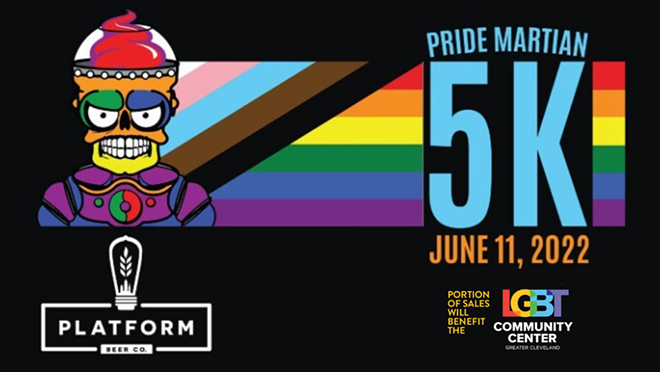 In keeping with the event's outer space theme, runners should wear futuristic Martian attire. The winning costume will score a $250 Platform Beer Co. gift card. All participants will receive a race shirt and Platform Beer Co. brew at the post-race party. A portion of proceeds from every 5k registration fee will benefit the LGBT Community Center of Greater Cleveland.

“This is our second year releasing Pride Martian and supporting the local LGBTQ+ Community organizations,” says Brittany Foster, Marketing Director for Platform Beer Company, in a press release. “With the release of Pride Martian, we hope to create something that everyone can feel proud to hold during Pride month that also makes a positive impact for our LGBTQ+ organizations.”

In advance of the event, Platform Beer Co. will host a Non-Profit Tuesday on May. 24. At that event, $1 of every Pride Martian beer sold at the brewery will be donated to the local LGBT Community Center of Greater Cleveland.

In addition, throughout the state of Ohio, $5 from every case of Platform Beer Co.’s Pride Martian Beer (up to $5,000) will be donated to Stonewall Columbus, which works to "increase visibility, inclusion and connection for the LGBTQ+ community, creating a place where everyone can thrive."

“The LGBT Community Center of Greater Cleveland continues our celebration of Pride in the CLE™ by partnering with Platform’s Pride Martian 5K. In doing so, we seek to elevate our mission of advocating, supporting, educating and celebrating the LGBTQ+ community here in Northeast Ohio,” says Matthew Graves, Director of Development & Communication, the Lesbian Gay Bisexual Transgender Community Center of Greater Cleveland.