Give thanks, if you see turkeys on this autumn stroll. 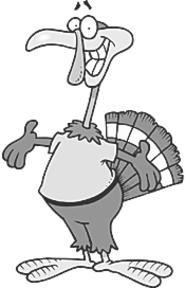 Dont be hating on Thanksgiving like that: The star of Sundays Turkey Trek.
SUN 11/9

If a gobbler is actually spotted at Sunday's Turkey Trek, it's gravy to Sarah Bogdanski. "We might not get to see any turkeys, but we're going to [see] turkey tracks," says the Hampton Hills Metro Park naturalist. She'll look high and low for the reclusive birds, which are somewhat easier to find now that they've been reclassified as a "recovered species" (meaning wildlife officials have repopulated them). They're especially thriving in Summit and Medina counties, which makes Bogdanski sorta hopeful. "I've seen quite a few recently," she says. Still, you're more likely to spot turkey vultures -- or even turkey-tail fungus, identified by its brown banding pattern, which resembles a turkey's backside. Just so we don't see any of it on our plate come Thanksgiving. Turkey Trek starts at 2 p.m. at Spring Hollow Trailhead at Hampton Hills Metro Park (off Akron-Peninsula Road, between Steels Corners and Bath roads, in Akron). It's free; call 330-865-8065. -- Allen Miller

Carol Zeh has had it with lunar lore, and she's putting a stop to it at Saturday's Moon Party. The Summit County Metro Parks naturalist will debunk moon myths, including ancient Greek tales about Diana the Huntress hitching the lunar orb to her chariot for her evening flight through the sky. "Then there's the one that people get loony when there is a full moon," Zeh sighs. After a thorough debunking, moongazers will step outside with their binoculars and telescopes to watch a lunar eclipse. "You'll see the shadow start on one side and move slowly across, until it reaches totality for about 15 or 20 minutes," Zeh says. "Then it slides off the other side." That's how the old myth goes, anyway. Witness the big wheel of cheese for yourself from 6 to 11 p.m. at the Coventry Oaks Pavilion of Firestone Metro Park, 200 East Warner Road in Akron. Admission is free; call 330-865-8065. -- Cris Glaser

Saturday's Winter Adventure Expo is all about cold-weather sports. And whether you're a fan of skiing, snowboarding, snowshoeing, tobogganing, hiking, indoor kayaking, or camping, chances are good that the 60-plus exhibits will fit your interests. There's apparel and equipment; representatives from local clubs, parks, and resorts; demonstrations; clinics; and an appearance by Olympian Brian Currutt (he's a member of the U.S. Freestyle Ski Team). Plus a Ski Queen Pageant! The Winter Adventure Expo runs from noon to 8 p.m. at the Richfield Holiday Inn (4742 Brecksville Road). Admission is $6 ($4 for kids); call 440-838-4330. -- Michael Gallucci