On the Rise to Expand its Bakery, Hires Britt-Marie Horrocks as New Director of Pastry 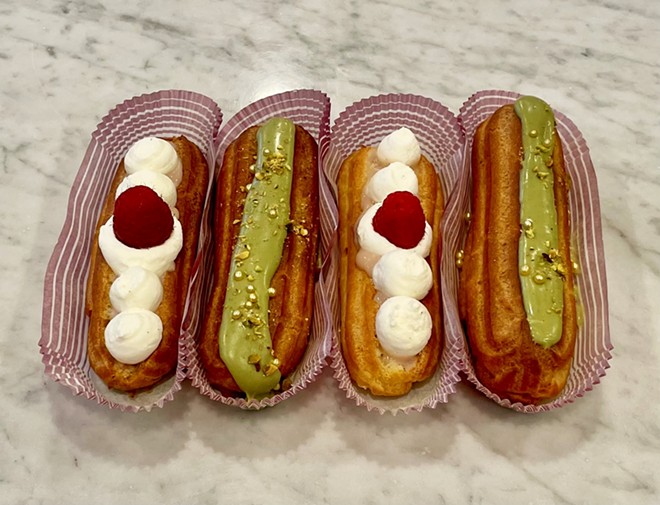 Britt-Marie Horrocks
Eclairs are just some of the new pastry offerings that On the Rise bakery will be adding to its menu.
Since opening On the Rise bakeshop, owners Adam and Jennifer Gidlow have been measured and deliberate with respect to expansion. Over the course of two decades, the Cleveland Heights-based business has beefed up its wholesale bread business, rolled out a savory menu of sandwiches, taken possession of an adjacent space and opened a satellite shop in the Market Hall at Van Aken District.

Now, entering its 21st year in business, On the Rise is poised for another major phase of expansion. The owners have acquired a recently vacated property to the rear of the building that will nearly double the production space of the bakery, allowing them to increase their offerings.

“We knew back at the end of 2019 that we wanted more space, but there wasn’t any more room to grow within the walls,” says partner Brian Evans. “And then this space in the back became available and it made sense to expand our kitchen right here.”

Once you discount the real estate gobbled up by the ovens, proofing boxes, coolers, freezers and dry storage, there’s little room left over for the humans who use them.

“We’re working on top of each other,” Evans adds. “We knew that if we were to continue to grow, we had to have more space to produce out of to be able to do things at the same quality we always have.”

One area in particular that is ripe for growth is the pastry category. The rapid success of the Van Aken District shop, Evans reports, was fueled largely by a demand for baked goods like croissants, scones, sticky buns, cookies and brownies. The additional square footage will be used primarily as a new pastry kitchen, which will be overseen by Britt-Marie Horrocks, who was recently brought in as director of patisserie. She joins director of viennoiserie Natalie Agresta.

“It’s hot, it’s humid and there’s flour everywhere,” Evans says of the main production space. “So trying to do some of those more delicate things was something we didn’t have the space or people to do. We’re hoping that Britt can help us build that team.”

The pastry kitchen won’t come online until late August, but already Horrocks has been expanding the sweet side of the business. Customers have begun seeing new products like French macarons, eclairs and seasonal cakes and torts. Those will be joined in the coming months by a wide selection of desserts, many of which were staples at the former Coquette Patisserie.

A future goal is to develop a wholesale pastry side of the business, providing area restaurants with a new source for fine desserts.

“When we open the new space up, I’ll be adding a whole new repertoire of pastries to the menu and we will be expanding into wholesale as well,” Horrocks says. “I think right now, pastry chefs are too few and far between in restaurants. We are a luxury item at this time and a lot of restaurants can’t afford to have one.”

Physical changes to the retail space will make room for additional coolers and display cases that will show off the new product.

“For us, the focus is on quality,” Evans explains. “I want people to know that no matter what it is, whether it’s a sandwich, a soup, a bread or a pastry, that they know that our name and quality go hand in hand.”