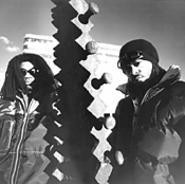 Das Efx
True hip-hop, they say, isn't on wax -- it's on stage. That ephemeral element has been the drawing power of the Lyricist Lounge tours, a tradition dense with bling-free underground standouts.

This year's featured players are Boot Camp Clik, who earned the spotlight as the talent-heavy Black Moon posse, spitting over dark, jazzy, Jamaican-tinged Beatminerz tracks. Following extensive major-label legal drama, the group lost the rights to its name and was forced to rechristen itself the Clik, holding down a lineup that includes the phenomenal Buckshot and hard-rhyming Cocoa Brovaz.

Just as Boot Camp was sparking, sewer-dwelling Das Efx went platinum on the strength of 1992's They Want Efx, an odd mix of grit and quirk that introduced off-beat, abstract styles to the mainstream. Das Efx's commercial success peaked then and there, but the mic checkas have maintained a cult following. Besides, who really cares if Das Efx and the other marquee talent on Lyricist Lounge don't get much airplay nowadays? As Buckshot once said, at least they got da props.