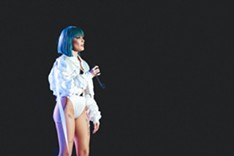 DONSLENS
Halsey performing earlier this year at the Forum in Los Angeles.
When electropop singer Halsey played Jacobs Pavilion at Nautica last summer, she performed with an undeniable swagger and regularly engaged the sold-out crowd during a visceral performance. It was as if she wanted to prove that she could command the big stage.

Last night before a near-capacity crowd at Wolstein Center, she made reference to that show at Nautica, which she referred to as “a sweaty pavilion.” She didn’t approach last night's show with the same intensity, but the choreographed, visually striking concert was on par with anything you'd see from pop divas like Lady Gaga. It struck a chord with fans and suggested Halsey has become a legitimate arena act.

At the show’s start, white curtains dropped to reveal a multi-level stage covered in smoke. With her drummer and keyboardist positioned on each side of the stage, Halsey slowly walked up and down the steps as she sang “Hold Me Down,” an upbeat tune that featured a perky synthesizer riff and rattling percussion. Dressed in white bike shorts and a sparkling white jacket, Halsey had her hair tied into tight braids. The ensemble made her look like a super model.

For “Castle,” a dark trip-hop tune, the lights that hung in the arena rafters dramatically lowered from the ceiling to hover just above the stage. Halsey then introduced “Strangers” by talking about how she wanted to make her concerts a safe place for her LGBTQ fans; the video treatment for the tune appropriately showed same-sex couples kissing.

The synth-heavy “Walls Could Talk” had an '80s feel to it, and Halsey effectively rapped her way through “Bad at Love,” turning the tune into a rousing shout-along with the fans.

Mid-concert, the singer delivered a stripped down set that featured only Halsey and her keyboardist, who shifted to center stage where he played a large white piano. Halsey capably delivered the ballads “Closer” and “Sorry” in that format, and she explained how the tour has been a “very emotional” experience for her as she’s seen her fans grow up along with her.

She plugged back in for “Angel on Fire” and then made her way to a satellite stage for hip-hop-oriented numbers such as the gangsta rap-inspired “Don’t Play,” a gritty track that featured the refrain “motherfucker, don’t play with me.” She introduced the ballad “Ghost” as the first song she ever wrote and then followed it with “100 Letters,” the first track she wrote for her latest album, Hopeless Fountain Kingdom.

She explained how “100 Letters” refers to an abusive relationship she finally ended, and she encouraged fans to stay away from people who want to put you down. She changed into a red hoodie for the trip-hop number “Now or Never,” a track that benefited from a booming bass riff. The set concluded with two of her biggest anthems, “Colors” and “Young Gods.”

After showing old concert footage that showed just what a chameleon she is (she's regularly changed her look over the years), Halsey returned to the stage for an encore that included “Gasoline” and “Hurricane,” rousing tunes that made for a potent one-two punch. Blasts of confetti signaled the two-hour concert’s conclusion.