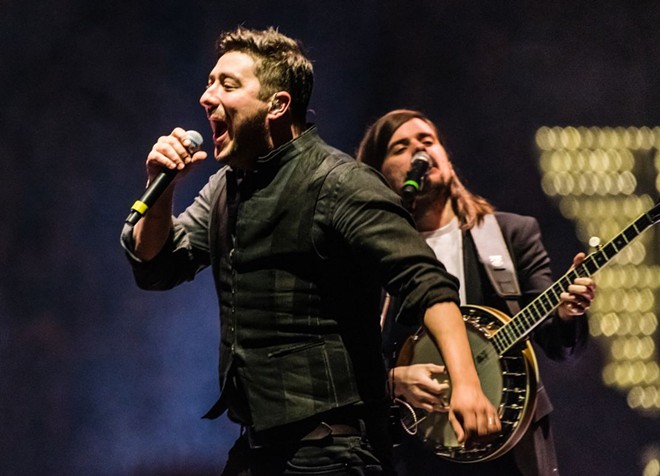 AMBER PATRICK
Fans were treated to two shows from Mumford and Sons last night at Quicken Loans Arena in a concert that highlighted the dissociative identity disorder that's emerged on the band's studio albums.

All told, this was a fun, engaging rock show from a band that remains connected to the fans who brought it worldwide acclaim. And the fans were joyous! The packed house was nearly orgiastic at times, like when Mumford and his Sons launched into early hits like "Little Lion Man" and "The Cave." But there were plenty of moments when the band took a hard left turn into newer material, which more closely resembles something along the lines of Coldplay or Twenty One Pilots. A hard left turn, I mean.

The effect was jarring. What compounded this sense that we were watching dueling concerts was the production values expended on the new stuff. Songs like "Beloved" and "Darkness Visible" earned fantastic beams of light and swirling visual effects; the folksy songs from the band's first two albums were often performed beneath an unembellished lighting design. For those earlier songs, the simpler stage presence served a great purpose and kept the focus on the give-and-take buzz of energy between band and crowd.

But the band performed in the round, which only highlighted the difference between those more earnest artistic beginnings and the arena-rock bluster of songs that seem like a cadre of well-paid producers must have been looking over the musicians' shoulders at every note. The crowd clearly showed up for one band, but the second group insisted on taking the mics and having their say.

With that in mind, the pace of the show was good. The two halves of the band were interspersed with each other almost uniformly across 95 minutes of music. Whether folksy or electro-rock in style, bearded bassist Ted Dwane used each song as an opportunity to bop around the stage and hoist his instrument aloft. When he was playing the upright, it very nearly seemed like he was about to throw the thing into the crowd.

During a four-song encore, the band rolled out an unexpected cover of Johnny Cash's cover of "Hurt." The nod to one-time Clevelander Trent Reznor was picked up happily by the crowd, and, by song's end, its late-show placement seemed to work very well. "That's a thank you to Cleveland for giving us Nine Inch Nails, and a thank you to the United States of America for giving us Johnny Cash," Marcus Mumford said.

Then, to cap the night, a pair of tunes that summed up the evening with picturesque aplomb: "I Will Wait" prompted the crowd's final rapturous embrace, and "Delta" delivered us a victory lap of Mumford's frenetic lighting and a burst of confetti to fill the room.