Jamaica's Sound System Culture is Coming to Cleveland This Summer 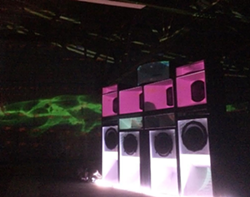 ERIC SANDY / SCENE
The Steel Yard Sound System in action.
The lineage of today's chart-topping hip-hop and, earlier, the international reggae scene can be traced back to the sound system culture that blossomed in Jamaica during the 1950s, 60s and 70s and soon spawned in cities across the world. The main idea was to gather thousands of people in the streets of Kingston's ghettos or, more commonly, a derelict warehouse and literally surround them with sound. In the middle of the party: a massive, multi-tiered sound system that blared head-throbbing dub, ska and, later, electronic music.

Picture a deep dance party, featuring multiple DJs and trippy lighting rigs; it's the forebear of modern festival culture in the U.S.

"We are doing our part to bring this culture to Cleveland's music scene," Steel Yard Sound System's Tim Smith says. Steel Yard is teeing up slate of monthly sound system parties on the westside, and we got a taste of it this past weekend. "All over the world this culture is growing faster than it ever has before with sound systems being built from Tokyo to Brazil, Glasgow to San Diego. Cleveland has a long history with reggae music and with the current growth the city is seeing on the backs of arts and culture, this is another cultural element that we want to see grow in our hometown."

In an expansive warehouse on West 65th (with room to grow and an outdoor patio/roof-type situation), Steel Yard set up its House of Joy and invited a few dozen friends to come check out it. When Scene arrived, the whole evening was in action; lights floated across broad concrete walls, and the sound system beckoned with liquid bass notes like a stoic god in the middle of the room. A small group danced feverishly right up against the system, ensconced completely in the music.

Jacob Bennett was spinning while we were there, and he delivered some crisp, deep EDM with dashes of dub rhythm. The evening's full slate included DJs from around the region.

The real party begins with an official launch on June 17 at the warehouse. Check out facebook.com/steelyardsoundsystem for details and tickets. Early birds are $15, but they'll jump to $25 in no time. DJs from Cleveland, Columbus, Los Angeles and New Orleans will be on hand for that party. (NOLA's Werd2jaH hosts the show.)

Smith told us that the plan is to grow the monthly parties into adjacent warehouse space and to hold cookouts in the outdoor area. With summer upon us, we can't think of a more quintessential event for a town in love with good music.

He passed along this documentary, too, which makes for some really cool musical culture education: