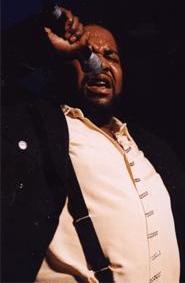 "He helped a lot of people," says Cleveland soul singer Conya Doss. "He came back and gave to the community. He put Cleveland on the map. Everybody I know has a link to Gerald."

The son of legendary O'Jays singer Eddie Levert, the impassioned vocalist, producer, and composer more than lived up to his family's legacy. As a member of the trio LeVert, he scored his first hit with 1987's "Casanova." After going solo in 1991, he recorded three platinum albums, as well as two more with the supergroup LSG (which also featured Keith Sweat and Johnny Gill).

"I've yet to see someone perform as great as he did," says Doss, who caught more Levert shows than she can count. "He was never mediocre. He had a lot of energy. And soul. He was well-groomed and sexy -- always."

Even in the wake of worldwide fame, Levert never ceased to call Newbury Township home, remaining a fixture in Northeast Ohio's R&B and soul community with his Trevel Production Company.

Doss met Levert when she was a young singer and he was a judge at a talent showcase. Years later, she recorded for him. "He's like Luther [Vandross]," she says. "I can't see anybody filling that void."

· Cleveland's Driver Side Impact has signed a four-album deal with Victory Records, the major independent punk label with a roster that includes Atreyu and Hawthorne Heights.

"I know that this band will mean something to people, because they are special," says Victory owner Tony Brummel, who signed the band. "Special is a nice way of saying different."

The band plans to record its full-length debut in early 2007, then spend the year on the road.

"We've looked up to Victory since we started playing music," says singer Brandon Langhals. "It's pretty amazing to see our name on the website."

· Sugar is working with the Velvematics' Jonnie Vincenzo on It's All About Me, its first record since singer D.C. split with the rest of the band. She says Sugar mark II is "more rock and roll" than the previous version, and the album should be available by year's end. The group plays the Red Parrot (538 Broadway Avenue, Lorain) Saturday, November 18.

· The Six Parts Seven's new Casually Smashed to Pieces won't be available until late January, but the Kent soundscapists have something to tide fans over. As part of a free EP, two tracks from the album are available at the website of the band's label, www.Suicidesqueeze.net. MP3EP is available only as a download and features four old tracks and new artwork.