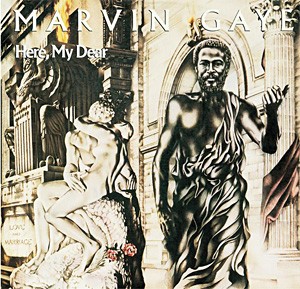 TOP PICK — Marvin Gaye: Here, My Dear — Expanded Edition (Hip-O Select)
Back in 1978, Marvin Gaye was going through a brutal divorce. His soon-to-be-ex-wife demanded royalties from the R&B legend's next album. So he intentionally went into the studio and made the most uncommercial record of his career, loaded with eight-minute songs about the end of his marriage. Not so surprisingly, it bombed. It now stands as his most personal work and one of the all-time-great breakup albums. This terrific two-CD reissue includes a bunch of alternate and extended versions that dig deeper into Gaye's troubled mind.

VIDEO GAME — Bomberman Land (Hudson)
The video-game classic gets a Wii update, complete with a wordy storyline that drops our hero in the middle of a tricked-out amusement park. Once the mini-games start piling up, the fun begins. You'll definitely want to give the multiplayer mode a spin, since blowing things up is always better when others are around. Best of all, the old-school battle games pit up to four gamers against each other.

DVD — The Darjeeling Limited (Fox)
Wes Anderson's latest movie overloads on the usual quirks and circumstances. But the story — about three estranged brothers crawling toward reconciliation during a trip across India — ranks among Anderson's warmest. Best of all, the companion short Hotel Chevalier (in which Natalie Portman gets buck naked) is among the bonus materials.

DVD — The Thrill of It All: A Visual History (1972-1982) (Virgin/EMI)
Roxy Music has always spent as much time on its image as its music. From its early ruffled-dandies stage getups through its ultra-stylish videos, it's nearly impossible to separate Roxy's sound from vision. Just try listening to "Avalon" without thinking of singer Bryan Ferry strolling along the English coastline like a glam James Bond. This two-disc set gathers more than three dozen music videos, TV appearances, and concert clips from the group's career. We especially like the feather-clad Roxy performing "Do the Strand" in 1973.

CD — Whiskeytown: Strangers Almanac — Deluxe Edition (Mood Food/Outpost/Geffen/UME)
Before Ryan Adams started making 15 albums a year, he fronted these alt-country shitkickers, who grabbed as much inspiration from kindred spirit Gram Parsons as from hard-drinking punks the Replacements. Whiskeytown made only a few records before it imploded; 1997's Strangers Almanac is the keeper. This two-disc reissue tags on a bunch of live performances, demos, and outtakes from a time when Adams knew when to leave well enough alone.