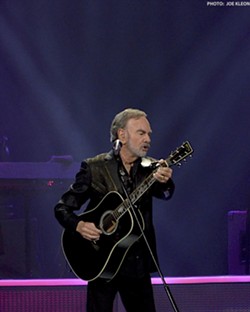 Joe Kleon Photo
There were no panties last night. No lacy panties thrown onto the Quicken Loans Arena stage. And while that traditional aspect of a Neil Diamond show wasn't there, his female fans were nonetheless thrilled to see the famed performer in the flesh for his 50th Anniversary Tour.

For the essentially sold-out performance, Diamond was in fine form, even if he did seem to be lacking a little energy. He carefully strutted around stage in his tight, lightly sparkling pants. He did pick at his guitar a few times, but mostly he sang into a microphone, letting his band pick up the instrumental slack. (See our photos from the event right here.)

Now, Diamond is lucky. Even from the beginning of his career, when he wasn't 76, he always had a way of talk-singing. This approach is helpful for a long and lasting career. His growling lower vocals are all still there, and his belted high notes are mostly on point, although his vibrato has gotten somewhat wider.

Talking in between songs, he was extremely grateful everyone came out to the show.

"We're happy to be back here in Cleveland, Ohio," Diamond said from the stage with a wry smile. "We played here, ya know, at the 1967 Ohio Teen Fair. Was anyone there?"

Some of the white-haired ladies in the crowd screamed their heads off, because they were there in their younger years. They remembered how Diamond's music made them feel. Diamond pointed to one woman in the front row and said, "Yeah, grandma, you were there."

This is a man who knows his audience. Diamond's music is my mother's music. It's many people's mothers' music. Some of it is quite cheesy, with the synthesizers and chimes. And last night, there was an almost sickly-fake MIDI-type instrumentation that would take over from time to time, like we were tuning in to a TV church revival.

But that's where Diamond gets you. As soon as you start thinking songs like "America," which he sang last night in honor of our troops and his immigrant grandparents, and "Skybird," which featured an actual animated seagull on the big screen, are a little over the top, he nails you over the head. Hits like "You Don't Bring Me Flowers" and "I Am ... I Said," which were played last night spectacularly with saxophone and piano, have some of the most devastating and depressing lyrics every written.

Whatever you may think, Diamond's one of the best-selling recording artists alive, and after all these years, he knows who he is.

After throwing out a string of the powerful, brass-heavy hits like "Holly Holy" and "Soolaimon" and the aforementioned "I Am ... I Said," Diamond left the stage. But we knew this couldn't be the end — there was one more he hadn't sung yet. And so the crowd waited and hollered and took out their lighters (not their panties). He had to come back.

Finally, Diamond emerged, in a different jacket, and the band launched into "Sweet Caroline." As we knew they would.

Hearing the crowd yelling that chorus along with their idol, it was unforgettable.