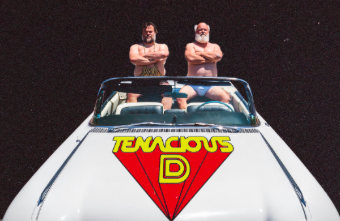 Taylor Stephens
Tenacious D, ready to rock.
The dynamic rock duo Tenacious D has added some dates to its upcoming tour, and the group will now perform at Blossom on Sept. 16. Tenacious D — Jack Black and Kyle Gass — will celebrate the 20th anniversary of their platinum-certified self-titled debut, which came out in September of 2001.

In October of last year, the band released a “Super Power Party Pack” edition of the project, featuring a reissue of the band’s original 1995 demo cassette and 2002 Tribute EP.

DJ Douggpound will open the show.

A ticket presale is currently underway. Tickets to the Tenacious D concert at Blossom go on sale to the general public at 10 a.m. on Friday.