The Best of the Boss

From the operatic to the folksy — Springsteen's done 'em all. 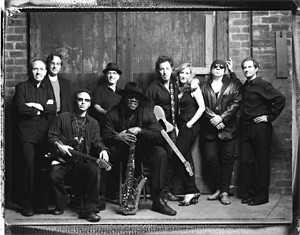 The Boss, his wife, and a bunch of guys he makes music with.

Bruce Springsteen is the quintessential American artist, blending soul-driven rock and folk with a sturdy working-class ethos. His romantic portraits of out-of-work/-love/-luck characters holding on to the last shreds of hope are almost operatic, thanks to a signature style that delivers Death of a Salesman themes via West Side Story's playbook.

With 14 studio albums (including his latest, Magic) in a catalog that spans 35 years, coming up with a list of Springsteen's all-time best songs is hopelessly subjective. In this case, it's also driven by a desire to represent different stretches of his long and storied career. Even if he isn't soaring to Born to Run's epic heights anymore, Springsteen continues to release good albums, demonstrating vitality, longevity, and relevance as an artist. Here are a dozen essential tracks culled from his career:

"Thunder Road," "Born to Run," and "Jungleland" (Born to Run)
This trio from Springsteen's breakout third release ranks among the best he's ever written, and picking among them is a fool's errand. They capture the epic romanticism of the road, as seen through the eyes of people seeking change. "The highway's jammed with broken heroes on a last-chance power drive," he sings in the title tune; in "Thunder Road," he offers his girl a chance "to case the promised land." It all boils down to compromise and acceptance: "Show a little faith, there's magic in the night/You ain't a beauty, but, hey, you're all right/And that's all right with me."

"Reason to Believe" (Nebraska)
It's hard to choose this track over the equally poignant "Atlantic City" — especially given the latter's well-sketched opening tableau of racket-based violence. But no song better articulates Springsteen's ethos than "Reason to Believe." Even faced with overwhelming hardship and ache, "at the end of every hard-earned day, people find some reason to believe," he sings. The harmonica-fueled folk strum and homespun wisdom echo Woody Guthrie and Pete Seeger — influences Springsteen would return to time and time again.

"Racing in the Street" (Darkness on the Edge of Town)
This could be heard as either a sequel to "Thunder Road" or a prelude to the grim tone that permeates The River. "She sits on the porch of her daddy's house, but all her pretty dreams are torn/She stares off alone into the night/With the eyes of one who hates for just being born," Springsteen sings over a spare piano melody. Unlike "Thunder Road," where "Heaven's waiting down on track," all this song's narrator can muster is a foreboding offer to "ride to the sea [to] wash these sins from our hands."

"Stolen Car" (The River)
As he got older, Springsteen pared back the florid lyricism that characterized his early work, finding a heart-piercing simplicity epitomized by this song. Like "Racing in the Street," it's consumed by guilt about a failed relationship. The narrator drives a pilfered ride down the main drag every night, hoping he'll get caught — yet fearful that "in this darkness I will disappear."

"Brilliant Disguise" (Tunnel of Love)
One of Springsteen's most autobiographical songs is a reaction to his deteriorating marriage to actress Julianne Phillips. Her vocation becomes the jumping-off point for Springsteen's foundation-shaking doubt, complicated by his own sudden stardom following Born in the U.S.A. Questioning his marriage, their backgrounds, and his success, he asks "What's a woman like you doing with me?" While the track suffers somewhat from the era's pop-oriented production, it's still a powerful, soul-baring moment.

"For You" (Greetings from Asbury Park, N.J.)
Springsteen's first great love song is delivered with a bite of disappointment over the fate ("Chelsea suicide with no apparent motive") of a strong-willed woman whose life "was one long emergency." It ultimately focuses on the narrator's heroic yet ineffectual efforts to reach her: "I've broken all your windows, and I've rammed through all your doors/And who am I to ask you to lick my sores?"

"Rosalita" (The Wild, the Innocent, & the E Street Shuffle)
Springsteen's go-to party-starter is lovingly sketched — from kids playing stickball in the street to the budding young love that's bubbling in the heart of our protagonist. The bouncy, horn-driven tune unspools from a drama-defusing distance ("One day we'll look back at this, and it will all seem funny"), which is absent from many of his other songs.

"Mary's Place" (The Rising)
Recorded in the wake of 9/11, The Rising was a clarion call to the American spirit — each song probing in a different way how a nation recovers from tragedy. This is Springsteen's best answer: Don't mourn or wallow; celebrate the friends, community, and life that remain. Behind a powerful and soulful punch, the song offers equal regard to the past ("Your favorite record's on the turntable") and present ("We're gonna have a party").

"Girls in Their Summer Clothes" (Magic)
This lush offering, with its swelling strings, from Springsteen's new album sounds more like Belle & Sebastian than vintage Boss. The youthful boardwalk of Springsteen's adolescence is viewed from the wistful perspective of 30 years gone. There's a fading autumnal glaze to the song, but hope persists: "Love's a fool's dance/I ain't got much sense, but I still got my feet."

"Dancing in the Dark" (Born in the U.S.A.)
The overproduced percussion nearly ruins this cut, which features Springsteen's usual desperation, tempered with a new element: maturity. The protagonist realizes he has to do something ("I'm just tired and bored with myself") and shed his cares ("You can't start a fire, worrying about your little world falling apart"), if he's to survive. This indomitable spirit is Springsteen's very essence as an artist.