A former king of Warrensville fights for his reputation. 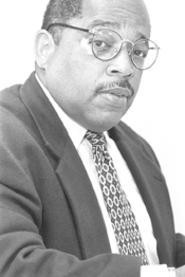 Walter Novak
The Call & Post's Michael A. House declined comment, but his paper retracted its comments about Grabow.
For years the motto "The Friendly City" has graced signs around Warrensville Heights. It may not be the flashiest slogan for a town, but it's as good as the "Geranium Center of the U.S.," which was the theme 75 years ago, when Warrensville was just another tiny village south of Cleveland, distinguished by an abundance of greenhouses.

Yet there is something unique about the contemporary motto: For one thing, it doesn't actually belong to Warrensville Heights. That's because several years ago, the city's then-mayor, Raymond J. Grabow, a man who dominated politics in this bedroom community for more than 30 years, registered it with the state -- as his private property.

Intentional or not, the move was a tangible display of what every small-time politician figures out sooner or later: Real power is more often the product of personality than it is a commodity of the office occupied.

Almost three years after leaving office under a cloud of controversy, Raymond Grabow is proving that point once again. In late September, Grabow, an attorney by trade, filed a defamation lawsuit against The Call & Post, Cleveland's oldest black newspaper, seeking $11 million in compensatory and punitive damages.

"I will not sit back and let anybody libel me or slander me or tarnish the reputation I built up of over 41 years of law practice and a total of 36 years as a mayor and councilman," says Grabow.

Ostensibly, the object of Grabow's ire, an editorial The Call & Post ran in its September 7 edition, wasn't even about him. It was supposed to be a shot at the current Warrensville City Council. Titled "Warrensville Council starts down path blazed by others," the piece compared the infighting among the burg's current council and mayor to the problems that plagued East Cleveland 20 years ago. Among other things, the paper chastised the council for proposing to curtail current Mayor Marcia L. Fudge's job of presiding over council meetings, a "role they never objected to while boss Grabow ruled the plantation."

The thinly veiled reference to a white man ruling a 90-percent black city was hardly the worst of it, as far as Grabow was concerned. In critiquing what the paper saw as the council's rubber-stamp role during Grabow's tenure, it identified the former mayor as "a convicted felon who stole city assets, violated the law and used a law enforcement system computer to spy on foes and members of the council."

Only one problem arose from that statement: It wasn't true.

In 1996, after a lengthy investigation by his own police department, Grabow was among five people indicted by a Cuyahoga County grand jury for improperly using city employees and equipment for private purposes. In February 1998, he pleaded guilty to soliciting improper compensation -- a misdemeanor -- in exchange for dropping charges against him for theft in office and misusing a law enforcement computer. Grabow paid a $200 fine and resigned from office.

Neither Connie Harper, The Call & Post's executive vice president and editor, nor Michael A. House, the paper's president, would comment on the lawsuit. However, four weeks ago, in the December 14 edition, the paper ran a retraction on its editorial page, admitting that Grabow had never been convicted of a felony. And in court documents filed last month, The Call & Post claimed that, because Grabow was a public figure and had never requested a retraction before filing the lawsuit, the paper can't be held liable for defaming him.

But Grabow's attorney, Howard Stern, says the paper's retraction was too little, too late. "It's unfortunate that The Call & Post took it upon themselves to print something that really wasn't true . . . and now they say, 'Whoops, pardon me, we made a mistake.' Of course they made a mistake. They made a very serious mistake, and people who are in the publishing business have to be scrupulously sure of what they are printing."

That Grabow is going forward with a lawsuit should surprise no one familiar with his political reign -- a record that still casts a sizable shadow over Warrensville Heights, three years and two administrations after he left office. For 30 years, he was the central figure in the suburb's civic life, managing the city with such single-minded force that critics said he often acted more like a dictator than an elected official. When he registered the city's "Friendly City" logo as his personal property in 1994, for example, he used it on his campaign and official city correspondence, even while he banned his opponent in the 1995 mayoral contest, a member of city council, from using it.

"Power tends to enhance the feel for more power," explains William Pegues, a former city council member and longtime Grabow ally who served a short stint as mayor when Grabow left office. "You get to the place where you almost feel that everything you do is correct and everything anyone else mentions is not correct . . . That happens with anyone who's been in power for any period of time."

It wasn't as if Grabow's supposedly feudal approach was a secret to residents. John Fuller, who's lived on the city's south side for 25 years, says Grabow's "dictator-type" style was readily apparent during the few council meetings he attended. Nevertheless, says Fuller, many residents, particularly seniors, were content with the services they received under Grabow.

Indeed, even Grabow's opponents still tout his ability to get things accomplished. His were the kind of retail politics -- getting streets plowed and the trash picked up on time -- that are the bread and butter of municipal governance. And they were among the reasons a white man was able to survive for so long in a city that's been predominantly African American for more than 20 years.

"I think the thing you've got to understand is that Mayor Grabow was a master politician," says Nathaniel Bolden, a former Cleveland Police officer who often found himself at odds with Grabow after being elected to Warrensville Council five years ago. "I believe, had he not got involved [in his legal troubles], he would still be mayor of Warrensville today."

Others aren't so sure. Despite her struggles with the council, current Mayor Fudge has been lauded for her openness and accessibility, and has had notable success in wooing new commerce to the city. "I think we need more businesses, and Mayor Fudge has done that," says Fuller. "And she's done a good job of working with surrounding cities."

Nevertheless, the residents of Warrensville Heights aren't about to forget 30 years and a lifetime of public service. Even if he's no longer the mayor, Grabow still wields a weighty legacy around the city he's called home for a half-century. "I've lived in the same house for 32 years," he says. "I'm not exactly a stranger in the community." And he's willing to go to court to preserve what he's built.