Can a man so tied to one company's failure teach others to succeed? 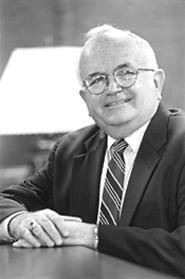 Walter Novak
Peter Kelly has made a conspicuous effort to reach out to students since coming to B-W.
So this is what exile from corporate America looks like: an office with the charm of a credit bureau. No secretary, no desk the size of the U.S.S. Enterprise, no view of the city skyline. Just a single window offering a peek at a courtyard in Berea.

No, this is not the office Peter Kelly thought he'd be occupying at this point in his life. Thirteen months ago, the 59-year-old Kelly was the chairman, president, and CEO of LTV Corp., one of the nation's largest steelmakers. He ran a company that employed 17,000 people and took in more than $4 billion annually. His salary was $850,000 a year.

Kelly, however, has experienced a curious twist in the sunset of his working life. Once lauded for his role in guiding LTV through its first bankruptcy, he resigned in November 2000 after less than two years as chairman. Blamed for LTV's poor performance and ill-timed investment strategy, he was inextricably linked with the company's speedy collapse.

Such circumstances wouldn't seem to bode well for the prospect of a second career in business. Yet today, a year after leaving LTV, Kelly is the director of MBA programs at Baldwin-Wallace College, one of the area's largest graduate business schools. Perhaps only in academia would it make any sense: The man who was blamed for LTV's failures is teaching others how to succeed.

Famed corporate chieftains usually come in two sizes: bold savant or malignant jackass. (General Electric's Jack Welch and Sunbeam's Al Dunlap exemplify their respective species.) Some leaders are both. Kelly was neither. Affable, self-deprecating, and a bit of a wiseass, he is hard to dislike, the kind of person who summarizes his four-decade rise through LTV as "catching a bunch of breaks."

The son of a steelworker who grew up in Quincy, Massachusetts, Kelly attended Harvard on a scholarship, the first person in his family to go to college. In 1963, he joined Jones & Laughlin Steel, a subsidiary of what would become LTV. He began attending law school at night. When he passed the bar, he joined the company's law department and launched his ascent. By 1986, when LTV fell into Chapter 11 bankruptcy for the first time, Kelly was the company's head lawyer, charged with guiding LTV through myriad court proceedings in what became the longest corporate reorganization in American history.

He eventually moved out of the law department and into business operations. In 1991, he became head of the steel unit. By 1997, he was named president and chief operating officer, tapped as the successor to chairman David Hoag. When Hoag retired in early 1999, Kelly became CEO.

In the 18 months he presided over LTV, the price of steel tanked. Imports and more efficient, domestic mini-mills continued to erode the market. Company investments faltered. Stockholders balked. By October of last year, LTV was in a free fall, bleeding cash and marching toward bankruptcy again. It lost more than $360 million in the first 10 months of 2000 alone. LTV's stock price fell south of a dollar, while its debt rocketed to nearly $1 billion. As one steel industry analyst told The Plain Dealer: "Somebody had to pay."

That somebody was Kelly. On November 9, 2000, he resigned, providing LTV's new leadership with a partial explanation for the company's woes. Calling Kelly's short-lived stewardship "not a normal pattern," new CEO William H. Bricker left little doubt where fingers could be pointed: "If you'd been making all the right decisions, you wouldn't have to do that."

Kelly was more diplomatic. He left without a word, refusing to rehash controversial decisions or explain his departure -- topics he still takes a pass on. He planned to travel, see his six grown children, play some golf.

That arrangement lasted all of three months. Weeks after leaving LTV, Kelly was approached by B-W officials about running the school's business program. He was intrigued. He had long been involved in education, even chairing the board of trustees at Notre Dame College in South Euclid. "When I started thinking about this position, the combination of the administrative role plus the teaching in this job was just too tempting." He started his new job in March.

To the world outside B-W, the hiring might seem a strange move. Fair or not, Kelly was the face of LTV's bumbling, the man most tied to its meltdown. The irony was too rich: The man who ran a company Fortune called one of the worst-managed in the nation was teaching others to succeed in business? Wasn't his hiring tantamount to having Mike White teach a class on How to Win Friends and Influence People?

To the folks at B-W who hired Kelly, however, the hire made perfect sense. They wanted someone who reflected the school's philosophy: that they were there to provide a hands-on, practical curriculum; that they should not only crank out competent MBA grads, but those with a sense of responsibility that extends beyond their latest performance evaluation.

"When we talked about hiring him, we did a lot of checking on Peter as a human being," says Peter Rea, chairman of B-W's Division of Business Administration. "I kept hearing, 'He's a B-W guy,' that he shared the school's values."

It's hardly a novel posture for a business school. Few programs tout the fact that many students are simply there to punch their ticket to better jobs and bigger paychecks.

Yet even before he arrived at B-W, Kelly seemed to personify the school's Ward Cleaver-meets-Warren Buffett ethos. He's been active in area charities for years. When Kelly's ouster from LTV became news, one of his former employees wrote a letter to The Plain Dealer, recalling how Kelly had once taken time out to donate blood and offer her help as she underwent a bone marrow transplant. "I consider it an honor to have worked under Peter Kelly," the woman wrote.

Since Kelly came to the school, that kind of behavior has earned him no small amount of goodwill. When he started, he called all of his students to introduce himself, asking them to stop by if they ever had problems.

Even so, students aren't shelling out $28,000 a year to get lessons in good citizenship. Learning to navigate the business world is their principal interest. Yet even through that prism, many see Kelly's tenure at LTV as an asset rather than a shortcoming -- an industrial-sized teachable moment.

"For an academician, it's an incredible story," says Rea. "Peter's been as open as he can possibly be. A lot of what he can get across to students is how you respond to adversity. Peter can reflect on how you cope with trouble, how it's the wrong time to think about what your values are when you're in the soup."

Kelly is far more oblique about whether having led a huge but faltering operation like LTV has made him an effective teacher. What's valuable from his experience, he says, is how it allows him to illustrate the breadth of consequence that business decisions can have. "The thing I can do is help students understand that there are so many stakeholders with a legitimate claim upon some part of what a good business can and ought to do," he says. "And how you have to balance that with the knowledge that, most of the time, you're going to have an environment where you cannot meet all of those needs."

Even the schools competing against B-W aren't willing to take shots at Kelly. They're more comfortable sniping about such sexy topics as accreditation and course variety.

"It's invaluable experience that he has," says W. Benoy Joseph, associate dean of Cleveland State's College of Business Administration. "Even if his company failed, it was for a number of reasons . . . and he still brings his management, his experience over his whole career."

Just as it's unfair to equate running a bad company with educational incompetence, says James M. Daley, director of the MBA program at John Carroll University, it would be unwise to think that running a profitable company would translate into being a good teacher. "Whether one was successful in business or not -- there's no correlation. Just as there is no correlation between academic success and business success."