Among other things: Unify Labs, formerly the Unify Project, is now Unify Jobs 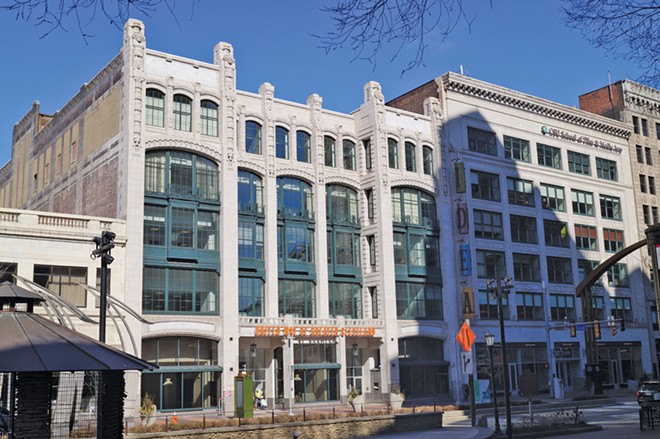 Yesterday was officially Augie Napoli's final day as President and CEO of the United Way of Greater Cleveland, an occasion marked in the local press by fond remembrances and interviews detailing the scope and style of his so-called transformational leadership.

Napoli arrived at the United Way in 2016, having been enlisted by the board of directors for his fundraising acumen. The organization was drifting deeper into irrelevance as its annual workplace giving campaign raised fewer and fewer dollars each year. The situation did not improve under Napoli — in fact it sharply worsened — and so he decided to impose a new mission on the organization: to fight poverty, and to target the reduced funding at organizations committed to the cause.

"Previously a pass-through entity that spread money from workplace campaigns, the United Way chapter is now an engaged organization designed to fight poverty with the support of diverse revenue streams," reads a retrospective on Napoli's tenure in Crain's.

This adjustment was by no means seamless. The drastic reduction in individual giving to United Way meant that a significant number of local nonprofits that had relied on programmatic support for years were cut out of the equation.  Napoli framed these reductions as a funding "pivot," one that would align the organization's spending with its new mission, while allowing it to be more "nimble" and "effective" as it "moved the needle on poverty in profound ways."

The pivot was accompanied by internal discord, including the hemorrhaging of staff and general confusion about the organization's direction and purpose.

Fortunately for Napoli, a global pandemic arrived and precluded serious external scrutiny.  Only weeks before Gov. Mike DeWine shut down the state of Ohio in March 2020, and salaried workers everywhere were glued to their laptops as DeWine and Dr. Amy Acton provided daily updates on Covid restrictions, Scene reported on the disarray at United Way and the financial implications of Napoli's pivot, including the creation of what he called the "Community Hub for Basic Needs," and the "Impact Institute" an inscrutable, venture-capital-adjacent fund to tackle poverty at its roots.

Back in 2020, employees at United Way hadn't the foggiest idea what the Impact Institute was or did. (The United Way has reported, in any case, that the Institute has raised a total of $55.7 million since it launched with a $1.5 million gift from Sandy and Sarah Cutler.)

The Impact Institute was described as a "think tank with an action plan" by board chairman Paul Dolan and was meant to be powered by Unify Labs, an advanced tech nonprofit formerly known as The Unify Project. Before it even existed as an organization with employees, the Unify Project was one of the centerpieces of Cleveland's bid for Amazon HQ2 in 2018. In that venue, it was described fancifully as using big data, blockchain technology and artificial intelligence to end poverty.

Scene clocked at the time that the Unify Project was an aspirational nothingburger created out of whole cloth using buzzwords of the moment. The fact that it failed to materialize was one of the most predictable developments of the past decade.

It was led, it seems pertinent to mention, by Sharon Sobol Jordan, who has now been hired to succeed Napoli at the United Way of Greater Cleveland.

Sobol Jordon was the former Chief of Staff to Cuyahoga County Executive Armond Budish. She skedaddled from the county's employ on the same day she was subpoenaed as part of a criminal investigation into Budish's tumultuous administration. Cleveland.com reported recently that Sobol Jordan earned $209,833 in 2018 and then $267,500 in 2019 as the Unify Project's CEO.

During that time, the Unify Project rebranded as Unify Labs and forged a partnership with the United Way, where Sobol Jordan served on the board of directors. Unify Labs was supposed to do advanced "data mining" for United Way that would somehow get to the bottom of generational poverty. Napoli pitched investors far and wide on a theoretical algorithm, to be created by Unify Labs, that would identify optimal funding recipients and radically disrupt philanthropy. It is needless to note that nothing of the sort occurred.

In the Silicon Valley pose of giddily embracing failure, Unify has charged on and rebranded yet again. It is now operating under the name Unify Jobs. Recent reporting in cleveland.com demonstrates that this newest incarnation should be regarded with the same level of suspicion as previous ones.

The goal of the organization is still to lift people out of poverty using high-tech solutions, but its means of doing so is now a proprietary job board for local corporations. Or perhaps an app? As in the past, details are hazy, though a press release boldly claimed that 35,000 hours of research and development went into creating this app, called FlashHired, that is supposed to eliminate bias in the hiring process. It was released in early 2021 and boasts "more than 100 downloads from the Google Play store, though no reviews."  A "full market launch" has been teased for this summer, and let's just say we're not holding our breath.

Sobol Jordan left Unify and has served in recent months as interim CEO of DigitalC, a nonprofit affordable provider of wireless internet for low-income Clevelanders that has vastly underperformed. In 2015, DigitalC set a goal of connecting 40,000 households. As of June, it had connected about 1,200.

Sobol Jordan was evidently in competition with more than 50 candidates for United Way's top job. She will be the first woman to lead the organization.  Paul Dolan told Crain's that Sobol Jordan stood out from the pack because of her "personal passion for the mission of addressing poverty in our community." Her "unique" resume was said to fit United Way "perfectly."  Unmentioned was her previous work for Unify Labs and the organization's ill-fated partnership that was roundly mocked by employees.

United Way has also launched, in Napoli's honor, the August Napoli Fund for Anti-Poverty Innovation, which will be housed within the Impact Institute and provide seed funding for start-ups and strategies in the anti-poverty space while also making my head explode.