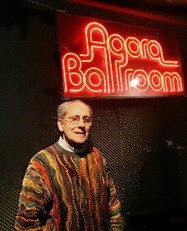 We're getting word that Hank LoConti, founder of Cleveland's legendary Agora, has died. He was 85.

LoConti opened the Agora in 1966, paving the way for the city's role in the canons of rock 'n' roll. The venue ushered in modern rock titans, like Bruce Springsteen and ZZ Top.

John Gorman, fellow Cleveland rock pioneer, posted this to Facebook today: "He lived a great life and was a major contributor to the entertainment scene in Greater Cleveland and beyond. Our condolences to his family and friends."

And from the fine folks at the Beachland Ballroom: "Rock n roll has lost a legend today... As an innovator and promoter of all things music and especially rock n' roll, Hank will be remembered for founding the first Cleveland Agora in 1966 and thereby placing Cleveland on the map of Rock History! Hank, thank you for your contribution, you will be dearly missed..."

Hank loved musicians and creative people. In fact, he was just as talented as any musician. His talent was his intellect. His imagination was his gift... he was the ultimate idea man. He was a charismatic visionary. People were drawn to Hank. In a word, he was cool. He was a quietly charming guy who could sell a refrigerator to an Eskimo.

Little did I know what a wild, crazy adventure I was embarking on when he called me in 1967 to book my group into The Agora.

After playing The Agora for years with Charade and Rainbow Canyon, Hank took me aside in 1976 and told me he envisioned a chain of Agoras around the country. He said he wanted the clubs to showcase every kind of music from rock to punk from jazz to metal. he asked if I would do the booking. So... for the next six years my life was a blur...like being on a runaway train and holding on for dear life. During that time Hank opened Agoras in 10 cities and in his spare time did 3 outdoor shows every summer at Legend Valley, Managed Artful Dodger, and did a TV show, "Onstage at The Agora" that was recorded live in Cleveland. Those shows were later broadcast around the world giving The Agora quite a rep. And this was before MTV existed.

Working closely with Hank in those years was amazing. I'm gonna miss him. He was my mentor, my father figure, Godfather to my son, and my dear friend for 47 years. I loved him. RIP ... gone but not forgotten.

Here are two nice videos to remember Hank by today: The first is an interview with "Another Look" and the second video is more of a tribute montage featuring plenty of Agora footage.