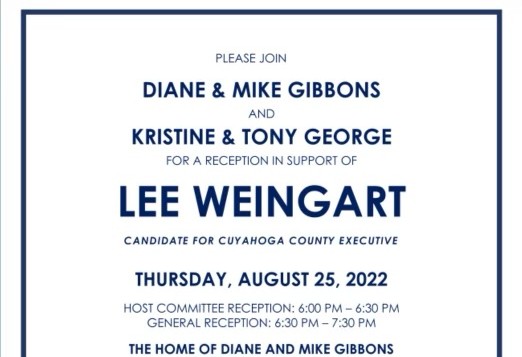 George and his wife Kristine will host the fundraiser alongside former Republican U.S. Senate candidate Mike Gibbons and his wife Diane at the Gibbons home in Fairview Park. Gibbons was among the ragtag crew of conservatives who lost to J.D. Vance in the primary earlier this year.

Tickets to the fundraiser's general reception are $150 per person or $250 per couple. High-rollers who contribute or raise between $1,000 and $10,000 are invited to a special host committee reception.

Though George has been a big-ticket bipartisan contributor to candidates in Northeast Ohio for decades, his stridently anti-LGBTQ views, his campaign to reduce the size and pay of Cleveland City Council, and his business practices, including the strategic purchase of a parcel of land on the Irishtown Bend hillside, has made him a controversial figure in recent years.

And last week, in a transcript of a deposition made public for the first time, George was identified as "Individual B" in FirstEnergy's deferred prosecution agreement with the feds in the HB6 scandal, the largest bribery scandal in the state of Ohio's history. George was revealed to have served as an intermediary between top FirstEnergy executives, including CEO Chuck Jones, and former Ohio House Speaker Larry Householder.

George's financial links to FirstEnergy were previously known, thanks to a state audit published last year. FirstEnergy had given millions of dollars to companies controlled by George, including to a nonprofit created by George to honor his son, who died in 2019. But the deposition showed that it was George texting with FirstEnergy CEO Jones about the attempted nuclear bailout at the center of the HB6 scandal, and about Housholder's designs to change term-limit policy that would have allowed him to extend his stay at the statehouse by more than a decade.

When reached by Scene, Weingart said he had no misgivings about the fundraiser Thursday or George's hosting of it.

"Tony has been a friend for many years," he said, "long before HB6 ever arose."

Weingart was likewise unconcerned earlier this summer after another incident of poor timing for his campaign. News of a federal subpoena seeking  information on nonprofits associated with former Cleveland councilman Basheer Jones broke just days after Jones had endorsed Weingart at a press event in Hough.

"Doesn't change our strategy one bit," Weingart wrote to Scene in a text message at the time. He quickly pivoted to the central planks of his policy platform after we alluded to the Jones subpoena as "rough news."