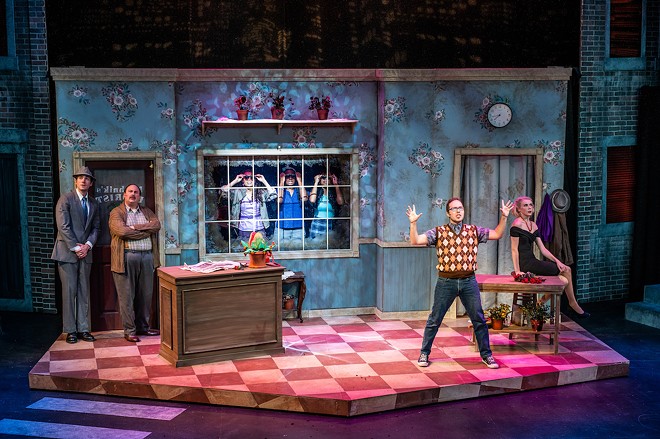 Let's face it, if you haven't seen "Little Shop of Horrors" by now (or even actually been in it) since it's been a perennial favorite of school, college and community theater groups for several decades, then you really have to call someone to remove the rock you've been living under. Surprise, it's 2022 and we're still humming along to this musical version of the cult eponymous cult flick. It features the Mushnik florist shop employees—schlub Seymour and fetching Audrey—along with the carnivorous botanical monstrosity dubbed Audrey II by love-smitten Seymour.

This evergreen show that had its premiere 40 years ago features the early 60s rock stylings of Alan Menken and lyricist Howard Ashman. But the core of Ashman's book centers on the unbridled gustatory violence of Audrey II, along with the kinks of Audrey's dentist boyfriend Orin, who is a sadist and serial abuser of women. Ah yes, we defined fun a little differently in the 1980s.

Many of the songs still hold up, such as "Somewhere That's Green," the clever paean to the dream of living a boring middle-class suburban life, and "Be a Dentist," in which Orin rhapsodizes over the pain he can inflict with his medieval approach to tooth extractions.

What this musical needs above all else is a cast that can find all the fun in these characters without getting bogged down in a script that tries to stretch a one-joke premise out to two hours including intermission.

In this cast, three performers stand out. In the role of Mr. Mushnik, Timothy Culver is sharp and amusing as the failed florist who is eager to profit by Audrey II's growing fame as a meat-eating petunia—never mind the people who start to go missing as its appetite for blood and guts increases. On this night, Culver also slickly avoided a costume mishap and didn't miss a beat.

In the juicy role of Orin, Michael Glavan plays one note of his character's personality with slimy joy in "Be a Dentist." And later he revels in the pleasures of nitrous oxide in "Now (t's Just the Gas)."

The third excellent performance is turned by an actor you never see: Brian E. Chandler as the voice of Audrey II. The onstage plant puppet is deftly handled by Robert Miller while Chandler gives a booming bass voice to the Venus-flytrap-from-hell that is plotting to take over the florist shop, along with the city and the world.

Slim and blonde Abby Stoffel looks the part of Audrey, and her singing is first rate. But she never makes a connection with either Seymour or the audience, reciting her lines without imagination or invention. As Seymour, Morgan Mills fares a bit better in the acting department, but doesn't embellish it with his own quirks to craft a character we care about.

The trio of female singers—Jocelyn Trimmer, Israeljah (Aylah) Khi-Reign and Hannah Hall—show up throughout and handle their duties with panache.

Director Teri J. Kent, who usually finds unique ways to punch up the staging of the shows she helms, lets the cast do the heavy lifting in this production. And the plant wins the day, in more ways than one.