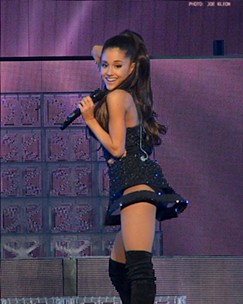 Joe Kleon
The problem with wanting to be a diva in today’s world is that the bar has been set so high. Within the last year or two, acts such as P!nk, Katy Perry, Lady Gaga and Cher have swung through town with elaborate productions that would rival any Broadway show. Ariana Grande, who played before an enthusiastic crowd of about 11,000 last night at Quicken Loans Arena, couldn’t compare. While her ability to belt out a note was impressive — her range rivals that of Mariah Carey — the show came off as a work-in-progress rather than a finished product. Check out a slideshow from the concert here.

The 90-minute concert began with a “bang” as Grande and a crew of dancers emerged from underneath the stage to launch into Grande’s big hit “Bang Bang,” a song that came complete with fireworks and flashy dance moves. In fact, the song was delivered with such gusto, it might have been better placed toward the end of the set.

The diminutive Grande, for her part, strutted the stage with the confidence of a Victoria’s Secret model. Throughout the night, she would change costumes regularly, slipping into one sparkling mid-riff baring outfit after another. She looked terrific. The stage, not so much. Minimal props were used in the show, and the ones that were used weren’t particularly impressive. During “Best Mistake,” she came out perched atop something that was supposed to resemble a cloud. It looked more like a paper mache art project that went awry.

The concert’s highlight was actually the stripped down segment that found Grande singing while sitting atop a piano as she belted out “My Everything” and “Just a Little Bit of Your Heart.” Without the mess of pre-recorded backing vocals, you could really hear the power of her voice. While her four-piece band was certainly capable of pumping up funky tracks such as “Love Me Harder” and “All My Love” into arena pop fodder, it was refreshing to see Grande take things down a notch.

Throughout the night, her multi-dexterous DJ regularly kept the crowd entertained between costume changes as he led sing-a-longs and shifted back and forth from two turntables to a laptop and back again. He was the glue that held the sometimes-shoddy show together.