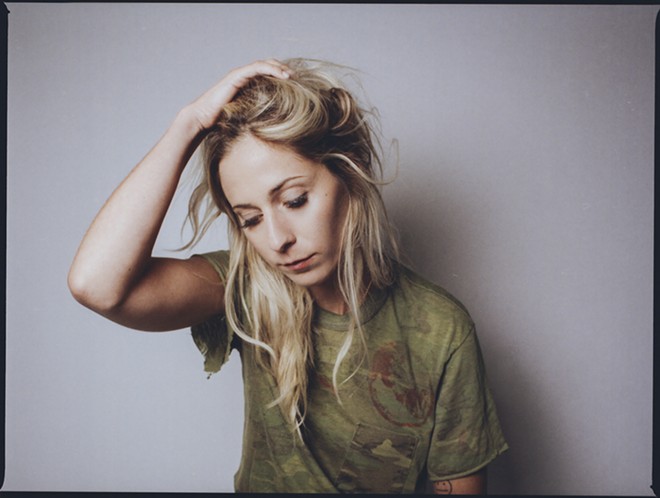 Alysse Gafkjen
For Bully bandleader Alicia Bognanno, audio engineering was her hot ticket out of the Midwest and into the music industry. Little did she know there was far more in store for her than recording the work of others.

Growing up in Rosemount, Minn., where the “alternative” station played Alanis Morissette and Sarah McLachlan, Bognanno picked up some keyboard and acoustic guitar but didn’t know anyone else who wanted to play. Her high school allowed students to take audio engineering classes at a local college, an opportunity Bognanno couldn’t pass up.

“That was my only access to get into anything [musical]. I didn’t know anyone who was in a band,” Bognanno explains in a recent phone interview. Bully performs with Goldmines at 8:30 p.m. on Thursday, Sept. 20, at the Beachland Tavern.

Bognanno went on to get a bachelors degree in the subject from Middle Tennessee State University.

While at audio engineering school, Bognanno found herself surrounded by musicians, and she caught the itch not only to record but also to play. She traded her acoustic guitar for an electric, and it stuck. She went on to intern at Steve Albini’s Electrical Audio studio in Chicago and moved to Nashville where she ran sound at the Stone Fox. There, she met bassist Reece Lazarus, who introduced her to guitarist Clayton Parker. Bognanno called on former collaborator Stewart Copeland to flesh out a new project that would be called Bully. Wesley Mitchell would later take over on drums.

Now, just four years after the release of its debut EP, the band has become the bedrock of the Nashville indie scene. But Bognanno is hesitant to accept that title.

“There was already a really solid indie rock scene when we arrived here,” she says. “I’m a little bit different than them because of the Stone Fox influence — a lot of rock 'n’ roll bands played there.”

Released three years ago, the band's debut, Feels Like, is, in large part, an analysis of childhood and coming-of-age memories, from the guilt Bognanno felt when she accidently broke her sister’s arm to getting drunk and throwing up in a friend’s car. She loses none of her introspection on last year's Losing, but life on the road is clearly a welcome distraction from the past. On “Running,” she sings “What’s it about being back in town/That always makes me feel like this and/I’m done with being back in town/It’s a silent steady existence.” Losing is stronger lyrically than previous releases. Perhaps that’s because touring has given Bognanno a new perspective.

Being an indie rock band is a lot of work. That’s even truer when you engineer your own records as Bognanno does.

“You record a record, you release the record, you play shows, and then you do it again,” she says. “When I’m home, all I do is write. It’s a constant process.”

Bognanno didn’t have as much time as she would have liked to really finesse the songs on Losing, but by the time she closed the book on the record, she couldn’t stand to listen to the whole album through even one more time.

“I don’t think I had the space with the songs that I wanted to get the distance I wanted from them,” Bognanno says. “I’m writing a demo now, and my goal is to have more time with the songs.”

Sometimes, Bognanno is so busy writing and performing that she has to remind herself that being a listener is an important part of being a musician, too.

“This last year, I’ve re-fallen in love with music,” she says. “It sounds corny to say, but when you are listening to lots of podcasts and NPR all the time, it’s great to get back into music.”

Lately, bands like Forth Wanderers, Blood on the Wall, Hookworm and Great Grandpa have been pumping through her headphones.

“I pay a lot of attention to the mixing of music I’m listening to, so I’d say that it ultimately has an impact on what I’m writing,” she says.

With Bully’s “hometown hero” status in a town that isn’t even home, would Bognanno ever consider moving away from Nashville?

“I’ve thought about leaving, but it’s very practical to live here,” she says. “I have a house where I can practice instead of being in a place where it’s common to live in an apartment. I’m from the Midwest, so I’ve thought about going back there, but I wouldn’t want to put strain on the guys [in the band] by leaving.”

After a fall tour, Bully will have some downtime (although we know Bognanno will carry on with her incessant writing), but the band expects to be back on the road early next year. Bognanno thinks that there will be a lot of tracking during that time too, which means a new release is on the horizon.