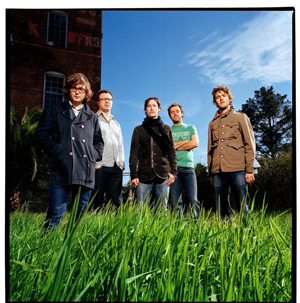 At last night’s concert at House of Blues, couples flirted, girls texted and circles of friends formed with their backs to the stage.

Gomez have racked up a solid catalog of music over the past decade (including their most recent album, A New Tide). But as live performers, the British band is pretty bland. The most interesting thing onstage was a toss-up between the light show and four minutes of watching Tom Gray play a melodica (it's like a miniature hand-held piano with a blow tube).

The five members barely moved from their spots onstage all night. Actually, Gray left his post a few times to switch instruments, but quickly returned to his X on the floor.

That’s not to say the crowd up front wasn’t filled with eager listeners. When Gomez played "Whippin’ Piccadilly" (from their debut album, Bring It On), the crowd was stirred enough to sing along.

Toward the end of the set, the band played "Airstream Driver" (the new album's most popular song), which piqued the interest of newer listeners. But even as the audience danced and sang, Gomez remained an immovable wall of music onstage.

Gomez have always been bigger in the U.K. With stage shows like this, it'll likely remain that way for quite some time. —Crystal Culler