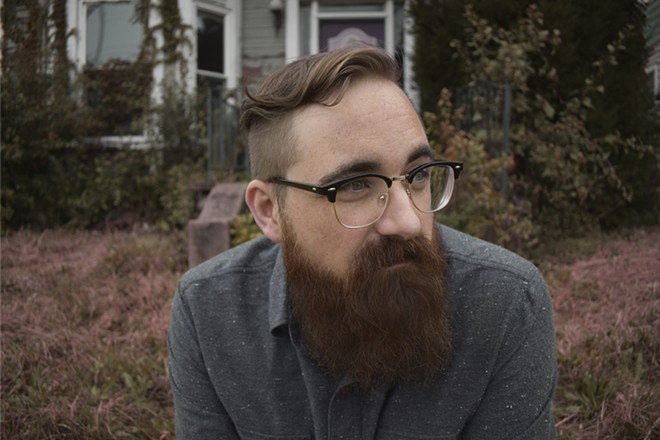 Photo by Abby Rose
This is the most normal David Mayfield’s life has ever been. Most days, there’s a routine: Coffee, dog walking, spending time with his wife and heading over to his recording studio in Canton. Some nights, just for fun, he’ll sit out on the front porch and pick at his guitar. It reminds him of why he fell in love with the sweet chords of bluegrass in the first place.

Sitting at Root Cafe in Lakewood earlier this week, the 37-year-old reflects on the ebbs and flows of a career that spans decades, thanks to an early start in his parents’ country-turned-bluegrass band. Over the years, the Kent native has performed at probably every VFW Hall in the Midwest. But he’s also played huge outdoor music festivals, performed on David Letterman’s old show with his sister Jessica Lea Mayfield and toured so much it felt like he had nothing left to give. When he moved back to Akron five years ago after living in Nashville for more than a decade, he wasn’t even sure he wanted to make music anymore.

“I was ready to close the door on that aspect of my career,” Mayfield admits. “I was burnt out. Everyone in the entire city of Nashville does the same thing. Your entire identity can get wrapped up in constantly trying to promote yourself and sell yourself, and I just hated it. I wanted to play music and go into the studio and have fun and create. I thought, ‘I’m done. I’m not going to make another album. I’m not going to tour anymore. [I'll] just produce bands and work at that.’”

Of course, today, we’re talking about his new solo record Boy Howdy!, which means, surprise, he did make music again. And Mayfield says that much of that has to do with meeting Abby Rose (the Speedbumps) at an open mic night. From the start, their musical chemistry was apparent and soon she was encouraging him to revisit these songs he’d tried to forget. They began hanging out at his studio, Sweetside Recording Company, and making demos.

“But then, I just sort of hit a creative snag with that,” he says. “Something happened in 2016 that changed the mood I was in ... some big political thing happened. I got really angry, and I wanted a way to console myself. So I started writing lyrics that were hopeful, about friendship and humanity. I sent them to Abby, and she fell in love with them, and she wrote the music.”

Writing those songs together was the start of their Cave Twins duo, a far departure from Mayfield’s self-deprecating/self-loathing tunes of the David Mayfield Parade band and also from Mayfield's solo work. This led to the Cave Twins' cutesy-folk debut coming out last year, followed by a national tour.

But the solo record was still there simmering on the back burner. So Mayfield called up some of his old friends — musicians like Scott Avett of the Avett Brothers and Jennifer Nettles of Sugarland along with other bluegrass greats ⁠— to see if they’d sing backup on a couple songs.

“It may be kind of a security blanket, like, ‘I don’t know if I’m good anymore, but these people are,’” he says. “Pretty much everyone I asked said, ‘Yes.’ The only person I think I tricked into being on it was John Paul White [formerly of the Civil Wars] because I tweeted at him. I said, ‘Hey, John Boy, would you want to sing on my new album?’ and he retweeted, ‘Love to.’ So that was done all very publicly.”

Noticeably, however, is the absence of any core family members on the record. He says he hasn’t spoken to his parents in over a year and his younger sister longer than that.

“It’s taken a lot of therapy in the last couple years to realize how bizarre our childhoods were, and [I've been] getting a lot of insight on that,” he says. “I’ve done so many interviews where it’s like, ‘We were a family band, and we lived on a bus and it was magical.’ And it’s usually easier to just say, ‘Yeah, it was magical.’ But it’s been harder and harder to say that, at least in these last couple years.”

Yet despite the fact that Mayfield didn't have a “normal American” upbringing (he was home-schooled since fifth grade, rolled around on a tour bus and had friends twice his age), Mayfield’s musical talent blossomed out of his adolescence. He didn’t play sports or video games, only guitar and mandolin. He says the stage is where he feels most at home.

This Valentine’s Day, Mayfield is headed back to the stage for a love-filled solo set at the G.A.R. Hall in Peninsula. He’ll play all the stringed instruments he can, sing in that beautiful, unaffected voice of his and pepper in a little comedy with his often bombastic stage presence.

“As my career has been shifting, I’m playing fewer bars at 11 p.m. and playing listening room shows, places like the G.A.R. where people are watching and listening as opposed to dancing and drinking,” he says. “It’s fun to play with that dynamic exchange when I can kind of feel the room. I can bring the room down and bring it back up and then shock people. That’s fun.”

Mayfield says he’s excited to finally get these new, drum-free songs out there. A couple on-brand personal tunes from Boy Howdy! would fit in perfectly on his other LPs, including “You Can’t Hurt Me Like I Can” and “Depression.” But Mayfield says he pushed himself to write from other perspectives too, pulling stories from books he’d read and old-timers he met in Nashville. The only cover, “Never Did No Wanderin’” from the mockumentary A Mighty Wind, adds a kick to the record, and shows off the prowess of all his bluegrass instrumentalists particularly well (check out the ridiculous music video for this one below).

His expectations for the self-produced record, which has already pulled in thousands of listens on Spotify since coming out last week, aren’t incredibly high. But he says that right now, he’s living the dream and that any day he’s not clocking in at Best Buy is a win.

“People ask me a lot, ‘Do you think with this album you’ll make it?’” he says. “I just don’t think like that. I feel like I’ve already made it because I do what I love doing. I get to work with people I respect who push me to be a better musician. And I get to record bands and produce bands I feel a creative connection with. I can’t think of anything else I’d rather do.”

Mayfield says he has musician friends who are wildly famous, and he’s not convinced that they’re any happier than him. Last summer, Mayfield was talking to one buddy who said he found it depressing his band sold 38,000 tickets at a certain arena, where the year prior they had sold 42,000.

“I was thinking, ‘I know what you mean because when I played the Beachland Ballroom the most recent time there were only 80 people there. So I can relate,’” Mayfield says. “It just shows you that it never ends. There’s always something to shoot for, if you’re chasing that sort of thing, like fame and numbers and tickets. And I just, I’m perfectly happy.”