Years after their breakup, Pittsburgh punkers the Cynics have reunited to catch up with a music scene that's gone to hell. 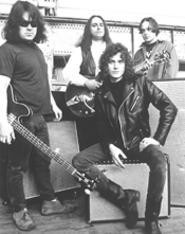 The Cynics want you to "wake the fuck up."
Gregg Kostelich chuckles through what must be clenched teeth when he explains the impetus behind the resurrection of his semilegendary Pittsburgh-based psychedelic garage-punk band the Cynics.

"With all the shit groups around -- the rap bands and all that crap -- we're trying to get to the younger generation so as to wake them the fuck up," Kostelich says via phone. "It's like look, have you heard a guitar lately?"

Certainly not many can honestly say that they have. At least not the kind of primal fuzz-toned guitar fury that Kostelich made his signature during the 1985-'95 heyday of the Cynics. But it's been half a decade since lead singer Michael Kastelic walked off the stage with the rest of the band following -- and the Cynics have not been heard from since.

"I don't think we really ever said 'fuck you' to each other and quit," Kostelich explains of the years the band was in hibernation. "I never really said, 'We broke up.' I never told anyone that. I just didn't talk about it. One day -- it was one of our New Year's Eve shows, I think -- Michael walked offstage, and that was it. Then we didn't talk again -- it was that strange. But now he has walked back. It's like he went away for a while -- to find his keys or his wallet or something -- and then came back."

What Kastelic did come back to is a band with a shared history and vision of rock and roll at its most primal. Starting in 1986 with Blue Train Station, the Cynics stained the post-punk landscape with a bombastic Nuggets-era garage-punk sound that was far too hip to stink of any sort of dull revivalism and just too plain savage at times to be sacked as simple pop retrospection. Instead the Cynics fueled their records with wild and manic energy (which was often surpassed in the band's best live shows), catchy-as-hell tunes, and pure sonic and psychedelic drubbing. Kastelic's vocals, a glorious blend of sneering growl and heartbreak croon, complement Kostelich's fuzzy and blurred guitar brilliance perfectly, and over the course of 10 hardworking years -- taking many cues from the late-'60s garage-pop explosion and turning that sound into something utterly their own -- the Cynics released at least two unforgettable records that defined not only the band, but a genre: 1989's Rock 'N' Roll and 1995's Get Our Way.

"Rock 'N' Roll was just a great record, but I thought Get Our Way was a fucking masterpiece to a certain degree," Kostelich claims. "The last song we did was 'Beyond the Calico Wall,' and I thought at the time -- not even knowing what was about to happen -- that this song would be a great way of ending the Cynics. When we recorded that album, I was getting this weird feeling that it was the end of this band. So 'Beyond the Calico Wall' was the last song we wrote. We wrote it right there on the spot, and I felt it was magic. I felt, 'This is it,' complete fucking magic. Like it was the perfect way for a band to end -- and it did. We toured behind the record, but that was the last thing we ever recorded."

Quietly, the Cynics were gone -- but (as the story seems to go most of the time these days) it turns out the band was never really forgotten. Kostelich spent much of the past five years fielding endless questions about the Cynics' status and tending to Get Hip Records, the label that the Cynics started.

"You know, a lot of people asked me, and I was tired of hearing, 'Hey, when are you guys gonna play again? Whatever happened to the Cynics?'" he says. "You know, we're trying to create a scene with all of the Get Hip bands. A lot of these bands are getting back together and touring now, and we've got some new bands onboard. All of this Get Hip scene is going to be fun, but we finally figured, 'Why doesn't the best-selling band on the label get their fucking shit together and go out and do it?'"

So when the call for an appearance at a concert called the Las Vegas Grind 2000 came along, Kostelich took a chance and called Kastelic. What would he think about getting the Cynics back together?

"I didn't think Michael and I would ever play again," recalls Kostelich. "But Michael finally called back one day, and we got together for one or two acoustic rehearsals -- just to see if we could do it, or if we wanted to do it. Well, we ran through every song pretty much without any mistakes, so we thought, 'Wow! That was cool.' And we basically looked at each other and said, 'Let's put the band back together.' It was a great vibe, so we figured we'd start it all over."

Kostelich and Kastelic reunited with original Cynics drummer Tom Hohn and a new bassist, and went to the Las Vegas Grind in July just hoping to have some fun again.

"They'd been bothering us to play the Vegas thing for a few years now, so we went out there, and it was just fucking great," Kostelich says. "The band was really tight, and things just felt so good. I remember just kicking ass, and at one point, while we were playing 'Love Me Then Go Away,' the crowd was going totally berserk. Just going absolutely crazy. It was a lot of fun and showed us that there was more to be done with this thing."

With a rousing and successful return to the stage, the Cynics are out on the road again, hitting the towns where they built their fan base.

"We're playing key towns where we've been successful and have some notoriety," Kostelich says. "Places that are fun -- Cleveland's fun, Detroit is fun, Chicago, New York City, and we hope to get to the West Coast sometime soon. And then maybe we will write another record in the future."

Kostelich sounds rapt about the recent turn of events for his band. With a tour of Spain slated (the band has an avid following there) and a series of dates set for a U.S. tour, the Cynics are set to take their punkish brand of psychedelic garage rock into another new era, hunting for a new and younger audience.

"It's just time," Kostelich growls about the Cynics' rebirth. "There's just too much crap passing for rock and roll nowadays."