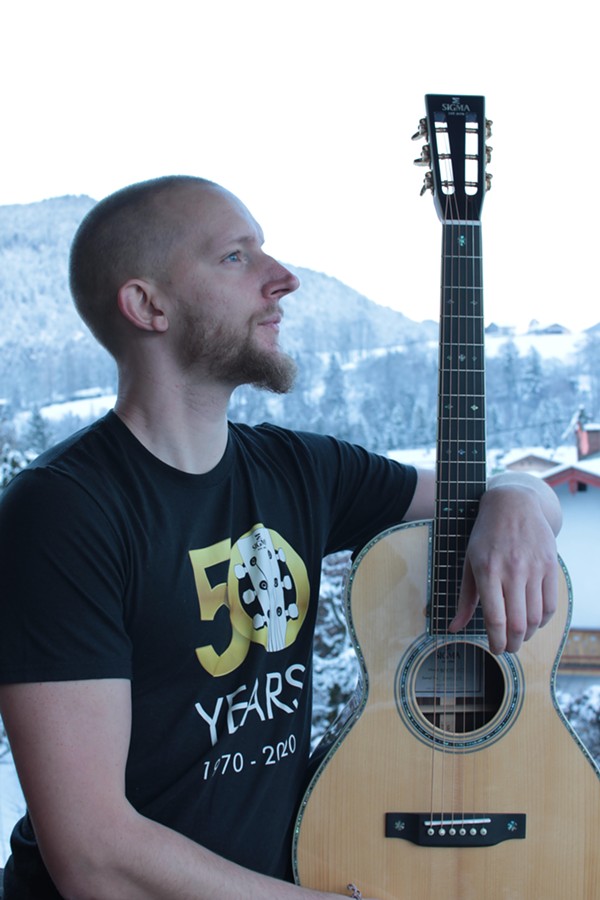 While that dream never fully materialized, the group had some terrific success during its run before it "screeched to a halt" in 2016.

"I wanted to bring something home like Tim "Ripper" Owens, who opened a restaurant/venue," says Hankins during a recent phone interview while he was back in Northeast Ohio to visit friends and family. He's just accepted a high-profile gig as Assistant Project Manager of A.M.I./Sigma Guitars in Munich, Germany.

In 2011, Hankins, who was 20 at the time, went on a European tour via a record deal that Simeon Soul Charger inked with SoulFood Distribution. The three-month tour turned into a five-year tour that found the band performing over 600 times in 17 countries until the group disbanded in 2016.

“One after another, members dropped out until it was just me and my brother,” says Hankins, who just launched his Akronite clothing brand in 2020 when he released a solo album. He also recently mastered his brother's second post-Simeon release Mudhouse Gang — Get Yer Demons Out as well as Simeon Soul Charger drummer Joe Kidd’s Flock of Moons EP. Both acts are currently based in the greater Akron area.

After Simeon Soul Charger split up, Hankins got married and embarked on his honeymoon. He worked as a “hired gun” as a bassist and mastering engineer and started to work on his solo album, which he recorded twice before nailing. He also took a job working on guitars at A.M.I./Sigma. He had to quit that gig to deal with an illness in the family.

Last month, however, the folks at Sigma Guitars gave him a ring and asked him to come back, now as Assistant Project Manager.

“[Owner Günther Lutz] wanted someone to protect the integrity of the guitars,” says Hankins. “He’s approaching his retirement and everyone else at the company still has some time to go. I had been gone for two years, and they called me out of nowhere. I hung up on them basically at first thinking I couldn't do it, and they called me back, and explained just how serious they were.”

Hankins will start at the company on Jan. 1.

“I feel like my whole life I’ve accumulated all these weird skills and can check all these weird boxes,” he says, adding that he's remained connected to Northeast Ohio even though he's been based in Europe. “Instead of having full-time jobs that don’t coincide with my dreams, I’ve been devoted to music. That’s one thing you can’t learn in school necessarily. I’ve been obsessed with guitars and building them. They don’t have anyone at Sigma who is fluent in English in terms of musical instruments. I’m fluent in German too. As a working-class musician, I hope to come up with fresh ideas for the guitars and company for their next chapter as well as mine.”