In Advance of Performing at the Grog Shop, the Melvins' Buzz Osborne Talks About Each Track on His Band's New Album 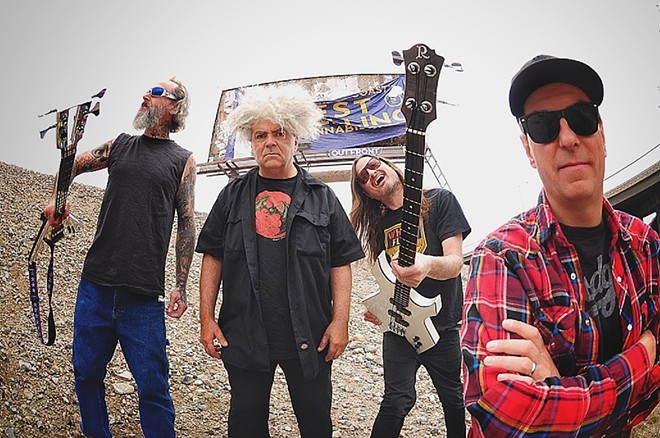 O
Grunge icons who formed in the early 1980s, the Melvins continue to nurture their own particular brand of doom metal. On its latest album, Pinkus Abortion Technician, the band teams up with bassist Steven McDonald (Redd Kross) and bassist Jeff Pinkus (Butthole Surfers), both of whom play on all of the songs. Tracks such as the classic rock-informed "Stop Moving to Florida," tune that features constipated vocals and a riveting guitar solo, suggest a different side to the band's sound.

In advance of a May 18 show at the Grog Shop, singer-guitarist Buzz Osborne talks about each track on the disc, the group's umpteenth studio release. "People say we’re really prolific, but, as any good economist would tell you, it's important to remember that when you see statistics about the economy, it’s ‘compared to what?'" jokes Osborne when we reach him via phone. "We only look prolific compared to lazy musicians.”

"'Stop’ is a cover of the James Gang doing a cover. It’s a combination of that song with Butthole Surfers’ ‘Moving to Florida.’ I thought it was a good idea. I think we sound more like Butthole Surfers than the James Gang, though I like the James Gang a good deal. I thought the two of them would go together really nicely. In my brain, it works great. If people have a hard time with that because they think it’s odd, they should get out more. It’s not that weird. We’ll see how many people know it in Cleveland. I won’t hold my breath. It’s amazing how small people’s musical taste is. I have room for both the James Gang and the Butthole Surfers in the same breath. Of course. Why wouldn’t you listen to both bands? I thought Jeff [Pinkus] did a good job of singing it. People need to understand that we’re part of no scene and not part of any genre whatsoever. We do things the way we want to. We’re never perverse — never perverse. If people think we’re perverse, they have no understanding of what we’re doing. I’m not joking.”

“Steven [McDonald] wrote this song. That one is really good. I think it’s really well-constructed. I was happy to add my guitar part to it. It’s fun to let someone like Steven do their job. You’re never disappointed if you just let guys like that do their thing. That’s what we did. On this album, I was really happy to let other people write songs and sing. It’s high time for that. I’ve written and recorded more than 400 songs if you add it all up. This album is like a salad bar. There’s room for everything. There’s something here that everybody can like.”

“Jeff [Pinkus] brought that in almost completely done. We flushed it out a little bit. It’s fun to play live. We’ve been playing it live. It’s a nice, mid-tempo fun song that still has an air of thickness about it that feels good. When someone brings in a track like that, you just say, ‘Yes.’ I have no problem with doing it exactly as he wanted. He really hit a home run with this one. I’ve always been open to that. I never said, 'I’m writing all the songs.' That’s never a conversation we had. It’s not like, ‘I write all of the songs because I’m the maestro.’ That’s just bullshit. If everyone brought in four songs, everyone would have four songs on the album. I would be a foooool not to embrace that. You bring in a song like that, it’s getting recorded with no argument.”

“[Drummer] Dale [Crover] brought that one in. It starts as an acoustic thing and shifts gears. It goes a lot of places. It fits in nicely. It’s still very, very weird.”

“That has more of a classic rock vibe. I think Jeff [Pinkus] wrote it for [his band] Honky, but Honky never used it, so we took it.”

“I Want to Hold Your Hand”

“That’s a cover of a cover. We do it the way that the Moving Sidewalks did it that way with that flavor. We had that idea a long time ago. We just do the whole song. We started playing it live with Steven [McDonald] playing the whole song, and we just recorded it that way. We do it a little weirder — never leave a good version unnoticed.”

“I wrote the vocals after we recorded the song. It was an easy song to write the vocals for. When you have music that that’s good, it’s not hard to do. I maybe spent a day on a half on it but went to the studio on my own and cut the vocals and surprised everyone.”

“We’ve been covering this Butthole Surfers song since when Jeff [Pinkus] was in the band the first time. It was lying around. People say this album has too many covers, but we just did a double album. Give us a break! Take a chill pill! You're going to give us shit for that? Go back to your Green Day albums or your stupid stoner rock band. There’s plenty of bands out there to spoon feed you pablum. Don’t expect us to do that. We are not your fucking parents. We’re not one of the bands who worry about what the fans want. Like I said, we’re not trying to be perverse. Our records are really well thought-out. If I was trying to be perverse, I wouldn’t have spent any time on the recording. The double album took an enormous amount of time to do and was massively intricate. Some people take it for granted, but other people think it’s the coolest thing they ever heard. That’s how we see it. Our music is for people who are not stupid.”