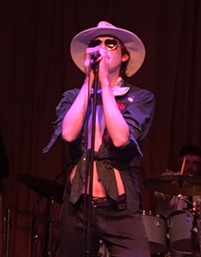 Touring in support of their fourth studio album, Hang, the L.A.-based pop/rock duo Foxygen continues to deliver something almost completely lost from American rock bands these days — a level a theatricality and spectacle that’s fully embraced in all of its ’60s and ’70s-influenced glory.

Last night as the band appeared at a packed Beachland Ballroom, Sam France, the band’s frontman and lead actor, emerged last while sporting heart-shaped sunglasses and a tied-up shirt that revealed his bare chest. He wore a beige, brimmed hat and had glitter all over his face. At a time when other bands that think it’s cool not to care how they present themselves on stage, it’s refreshing to see a band with such a clear image and desire to be in the spotlight.

The band opened with three older tunes: the Stones-influenced, proto-punk song “We Are The 21st Century Ambassadors of Peace & Magic” and two mellow pop tracks, “San Francisco” and “Shuggie.” Next, the band dove head first into a full-performance of the new album, starting with the album’s funkiest, most approachable track “Follow the Leader.”

The band’s onstage dynamic had this wonderful sense of juxtaposition. While guitar/keyboard player Jonathan Rado is a calm, tight and precise master of his craft, France is a chaotic, spontaneous, unhinged ball of energy. He threw himself all over the stage and commanded the crowd’s attention at all times. While France’s eccentric stage presence is nothing new (think Mick Jagger or Iggy Pop), it still comes off as something fresh.

There’s an overwhelming sense of danger and suspense about the way France performs. At one point, while crouched over, he did several spins on the edge of the stage, nearly falling into the crowd with each spin in order to playfully tease the adoring fans reaching for him. While France danced around stage like a cross between a whirling dervish, a fish out of water and a madman, Rado only briefly inserted himself into the spotlight by playing a guitar solo on top of the piano, dazzling the crowd with his melodic, intricate style of play.

Several other musicians, including a backup singer and a three-piece brass section, accompanied the duo on stage. The horns allowed the band to replicate  its dramatic, colossal, over the top, sound, but a poor mix and lack of clear sound quality marred the set. Often the bombastic sound of the brass, keyboards, drums and guitar drowned out the vocals.

Despite the sound issues, there were still many standout moments and performances, including the new, cinematic track “America,” which was France’s strongest vocal performance of the night. During the lengthy musical interlude, France and the backup singer ran off stage only to reappear wearing matching black suits in perfect Hollywood showbiz fashion.

France blew kisses to the crowd at the show's end but returned to play an encore that included a few of the band’s classic tracks including the sassy “How Can You Really” and the oddball pop tune “No Destruction.”