With a zillion young bands for a few bucks, it's still good to be Warped. 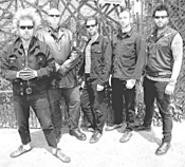 Lars Frederiksen (far left) is a Bastard.
The cries of "Sellout!" that plague punk rock are as old and tired as Sex Pistols reunions. If a band ships platinum, finds success on the radio, or in some cases even leaves its garage, sniping about its lack of authenticity is sure to follow. Ten years into the annual Vans Warped Tour, sell-out allegations seem just about inevitable for the mecca of all things punk rock.

"We've actually been selling out venues in many markets," tour founder Kevin Lyman says. "Our attendances have been up 20 percent overall throughout the summer. I mean, we've just been doing great. It's been surprising at times. The energy is really good."

In a summer when Lollapalooza imploded before it even began and multiplatinum pinups like Norah Jones and Incubus overestimated their drawing power, the success of Warped is one of the few positive signs for the tour industry. Warped's business model -- cheap tickets and an overabundance of nondinosaur bands that people actually want to see -- keeps consumers' wallets happy and their thirst for moshing sated.

"It's just a good place for a kid if you're wanting to see a good show, a lot of different types of music, and a lot of different types of bands," says Rancid guitarist Lars Frederiksen, whose side band the Bastards is one of this year's headliners. "It's the equivalent of going through the dollar bin at the record store. You know that if you pay a buck, you're not really blowing your load on some record, even if you hate it. If there's 10 bands that you hate, there's probably 3 bands that you love."

One main reason the tour has survived and remained affordable is corporate sponsorships. Lyman notes that had the shoe company Vans not attached itself to the tour during its second go-round, Warped may not have even rocked onward that year. Combining the commercialism of a large package tour teeming with business bucks (no matter how cutting-edge those companies are) and the notoriously independent nature of punk rock seems like mixing oil and water.

But what separates the Warped Tour from other bloated schmoozefests and protects it from detractors is that its focus isn't directed toward the bottom line of the bean counters or toward deifying rock stars. As Frederiksen puts it, Warped is "not for some inflated rock-star ego that needs to make three million dollars a gig.

"Punk rock's like the color of my skin," he says. "I mean, Willie Nelson plays country for 70 fucking years, I play punk rock. The reason why I got drawn to it is because [it was a reaction to] the whole excess, rock-and-roll party thing that a lot of these hair-metal bands were preaching about -- 'Look at me, look how cool I am,' all that fucking weird egocentric bullshit.

"Some kids might call themselves punk but act like Mötley Crüe. But I'm not a punk cop, and I'm not a role model -- to each his own. Punk rock is a place where you can do whatever the fuck you want to do. GG Allin was considered punk, and so was Crass. Punk is a pretty broad spectrum, and it doesn't have a set of rules. It's not the way you look. It's an ideology in a sense, it's about being an outcast in a lot of senses."

Punk these days is "probably more of a mainstream culture, it's not as scary," says Lyman. Even so, Warped 2004 has never been more renegade. Anything goes -- from prog-pounding (Coheed & Cambria) to Irish pub punk (Flogging Molly), brainy hardcore (From Autumn to Ashes) to sugary keyboard emo (Motion City Soundtrack). And while some past tour stars seem ghastly in hindsight -- 1990s treks, for better or worse, helped Eminem, Kid Rock, Sugar Ray, and Limp Bizkit raise their mainstream profiles -- their inclusion then seemed slightly dangerous. These acts might fall under the rubric of rap or nü metal, but their don't-give-a-fuck approach matched (and still does match) Warped's outlaw attitude.

This outlook certainly keeps punk lifers like Frederiksen coming back year after year, this time in support of the Bastards' second album, Viking. Less reggae-influenced than Rancid, the disc bleeds aggression: gutterpunk chords and gang-style choruses ("Skins, Punx and Drunx," "Switchblade"), bursts of quicksilver mania ("Fight," "Blind Ambition"), furious punkabilly (a cover of the Blasters' "Marie Marie"), and plenty of slashing, lightning-fast anthems ("Streetwise Professor"). The album was largely co-written with and produced by Tim Armstrong, Frederiksen's Rancid bandmate and best friend of 12 years. Frederiksen emphasizes that he's not trying to separate the two groups. In fact, the Bastards' "Little Rude Girl" is a tune the duo has been trying and failing to nail on disc since 1993. His collaboration with Armstrong is simply an extension of their close relationship -- blood brothers in punk rock.

"Rancid's like a family, so any other chance we get to hang out is a good opportunity," Frederiksen says. "And making records is just one of the many facets of how we hang with each other. We're just super-tight. Being friends like we are just makes sense. Just when you can relate to somebody -- and he's thinking what you're thinking, and you're thinking what he's thinking -- it's a great place to be as a songwriter, with another songwriter."

The same camaraderie keeps Warped together too. And with next year's planned expansion to Europe and Australia, and another trip to Japan, the tour looks to only get bigger.

"It's funny, my wife's been out with me for three days with the kids, and she's just going, 'Are you going to be doing this forever?'" Lyman says. "I said, 'You know, maybe.' Honestly, it's what I wanted to do all of my life. Or ever since I got in the business, which was 23 years ago, to keep doing what I love. Why not keep doing it?"