Jam Rockers Gov't Mule Get Political on Their New Album 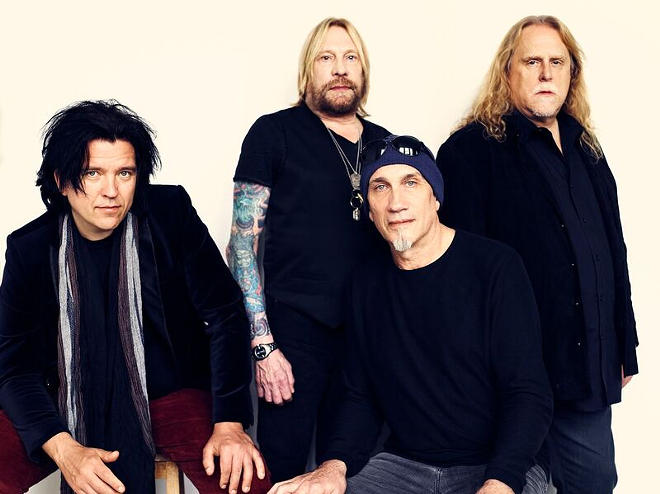 Courtesy of Press Here Publicity
After touring to celebrate their 20th anniversary in 2014, the guys in the jam band Gov’t Mule decided to take a break. Band leader Warren Haynes, however, spent most of his time writing new material so that when the group returned to the studio in 2016 it had plenty of material to record for what would become its new album, Revolution Come… Revolution Go.

As the album title implies, the songs have a political bent to them, something that was exacerbated by the fact that the band went into the studio on election day.

“That was just a coincidence,” says Haynes when asked about what it was like to commence recording on the very day that the country elected an arguably unqualified candidate to become president. The band performs at 8 p.m. on Saturday at the Masonic Auditorium. “I don’t know that it changed the song selection so to speak, and it didn’t change what the songs meant, but it changed the way they were interpreted. ‘Stone Cold Rage’ was written about the divide in our nation. That divide was going to be there regardless of who won the election, even though we weren’t expecting it to go the way it did. That wasn’t going to change no matter what happened. It’s talking about traveling around the country and seeing what’s going on, and it’s going on everywhere.”

With each record, the band aims to dig deeper into its roots and draw from its initial inspirations. The new album might be the group's most sonically expansive.

“If you go back to the very first record, that was record made to bring back the concept of the power trio," explains Haynes. "We felt that at that time, nobody else was doing that and no one had done it in some time. At that point, Gov’t Mule was just a side project and something to do for fun. We hadn’t thought about making a second record or a third record or anything. We just wanted to take it one step at a time. Once we realized we would stay together, we started pursuing more and more of the influences we had individually and collectively. You can see that growth with each record. With this record, since we had just celebrated our twentieth anniversary, it felt like a brand new chapter, and we felt like we had a clean slate.”

Songs such as “Traveling Tune” are a little more on the country side of Southern rock than anything Gov’t Mule has ever done. The ballad “Sarah Surrender” shifts musical direction and has an Al Green type of vibe.

“When I wrote it, I wasn’t sure it belonged on the record,” says Haynes when asked about “Sarah Surrender.” “When I played it for everybody, they were excited and thought it rounded out the overall picture. We recorded that in New York. It was the only song that wasn’t recorded during the Austin recording session. We finished it last, and it seems to complete the overall concept of the record.”

Haynes says the band’s live shows have been particularly rewarding. The new material fits well into the sets, and the group has even considered ways of adding the album’s B-sides to the mix.

“Every show is different, and every set list is different,” he says. “We try to do a handful of songs from the new record every night, but there’s no steadfast rules. Sometimes, we do quite a few and sometimes not that many. It depends on the night, but it’s great to have that new material to interject into the repertoire.”