Music Tapes' Julian Koster finds his muse in the death of a Superman. 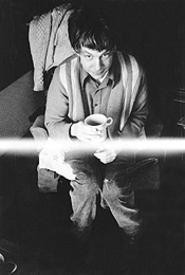 Boob tubed: Julian Koster.
Music Tapes auteur Julian Koster can pinpoint the moment that changed his life: It was the day his mother told him that Superman George Reeves, who provided the young Koster with hours of escapist entertainment via daily reruns of the '50s television adventures of the Man of Steel, was dead. As Koster puts it, "The very thing I had always wanted to be, Superman, had destroyed him." Reeves committed suicide in 1959.

Throughout the years Koster viewed Reeves as a "tiny ghost trapped inside my television set, much like you might watch a pet goldfish in a bowl, even while you know it would be happier off in the sea." Retreating to his bedroom with a four-track machine, Koster set out to "free a goldfish."

The Music Tapes is a result of that initial experiment, basically a one-man project made up of found sounds, pre-digital recording equipment, and occasionally lush soundscapes. The debut album, 1st Imaginary Symphony for Nomad, travels through twentieth-century technology and back, trying to make sense of a world without a Superman.

"The album is about trying to create George Reeves's ghost and to free up his experiences and life, and reconcile some things about the world up to that point," Koster explains.

"I reached a point where I felt I really couldn't function in the world unless I came to some sort of understanding with these things. I tried to reconcile them for myself and had this overwhelming sense that I just needed to go ahead and try to solve it or take it on. I just needed to go inside and hide, and not deal with the outside world at all. And I had a sense at the time that I could try and do it."

The Music Tapes itself was spawned from similar aspirations. As a floating member of Elephant 6 collectives Neutral Milk Hotel and Olivia Tremor Control, Koster is no stranger to the power of sound. Taking its cue from Beach Boy Brian Wilson's damaged unreleased opus Smile, the Elephant 6 bands conjure up conceptual pieces based on the total aural experience of the world at hand rather than melody or other traditional song structures. The Music Tapes may be the most esoteric of the lot.

"For the most part, the Music Tapes started when I was about fifteen," says the 26-year-old. "I didn't get to spend as much time with my friends as I wanted to, and it was sort of like a way to spend time with them. I had gotten a four-track, and I spent time in my room making these little adventures in these little worlds and putting them on tape. They could be anything, as long as they were like some sort of landscape that one of my friends could explore. They could go home and listen to it in their room, and in that half-hour, it was like we could share a certain amount of time or a certain amount of contact."

Koster says that initial inspiration came from his mother's collection of old radio serial records. "I always thought that there were all these records out there that treated sound kind of differently, where sound was more important," he clarifies. "The records were either stories or radio serials that came out in the '50s and '60s, and they had all sorts of different purposes. But what seemed cool about them to me was that sound was so much more important — all the things that come with sound, closing your eyes and taking in your sense of hearing, and basically drawing mental pictures.

"Before television, people would put on the radios, and their sense of hearing was so much more important. There was such a broad spectrum of possibilities — things that it could express or places that it could take you. I wanted a place to go and a place to meet."

Koster's love-hate relationship with the small screen is at the center of 1st Imaginary Symphony for Nomad, driving its tale of frustrated inventors and alien observers. "Television seems to be at the center of everything," he says. "I wasn't so much sitting there making things up [for the record] as much as they were just sort of showing up and happening. Everyone grew up with TV. There's such a weird commonality between everyone, everywhere, all of us, in a sense. To me, it's not just TV. It extends way beyond TV; in a way, it seems to be like some weird living, breathing metaphor."

It's hard to make out just exactly what is going within the album's seventeen songs, but their tinny, scratchy, and often warm sound (courtesy of such archaic devices as reel-to-reel tape recorders, '40s-era wire recorders, and an 1895 Edison wax cylinder recorder) certainly evoke a less technology-driven time, or at the very least a pre-digital age of enlightenment.

Koster cites old Al Jolson 78s and Louis Armstrong recordings as primary influences on the Music Tapes' sound: "I really love the idea of character in sound. Those recordings have great character. They're just so beautiful." And it's that thrill of discovery that's celebrated on 1st Imaginary Symphony for Nomad, with the ghost of George Reeves as its guide.

"I think that humans are incredibly powerful," Koster states. "I think we're capable of so much, and we're in control of so much, that, in a sense, it's like we're inventing our own reality and always have been. The one thing that stops us and causes a lot of pain seems to be this incredible sense of powerlessness that seems to pervade everything in our culture. It seems like there is this strange, recurring theme in so much that says, You're not powerful, you're not in control. And in a way, we're the only thing that really affects us. That's what I learned through making the record."

Taking the Music Tapes on the road may seem to pose a few problems (how exactly does one tour in support of a bedroom project?), but Koster — a veteran of road shows with both Neutral Milk Hotel and Olivia Tremor Control — is philosophical about the whole thing. "We're trying to bring the Music Tapes into the real world," he explains. "We're trying to make things that existed previously exist in the real world."

He says that anywhere between two and seven people tour as the Music Tapes, and that such nontraditional gadgets as a television set, a seven-foot metronome (with a pedal system), and the "tapes themselves perform as well." Koster adds that many machines were built for Music Tapes performances, including a clapping mechanism and a static-generating device.

"Everything has an equal role in the performance," he points out. "We're so incredibly entertained by machines that we take them for granted now. I think, at the turn of the century, the appreciation of a machine was a validation of human invention. People were thrilled. Now it's like with television and computers, we're no less captivated but a lot less excited and appreciative.