Rage Against the Machine Settles For Revolutionary Nostalgia At Cleveland Concert

The band settled for generic sentiments 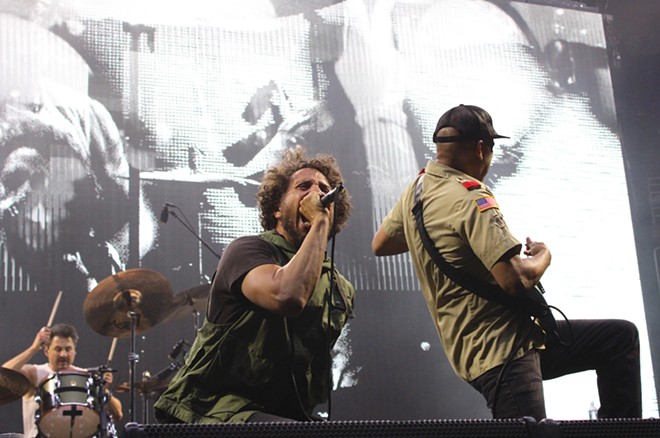 Let’s make one thing clear: nobody’s starting a revolution if they attended Wednesday’s Rage Against the Machine concert in Cleveland.

The band’s appearance at Rocket Mortgage FieldHouse was nostalgia for an era (if one ever existed) when the band’s far-left, anti-authoritarian music had the potential to spark change. Nostalgia at a decidedly un-revolutionary price of $100+ price per ticket.

But even a show steeped in memories of yore can have a good soundtrack. Rage’s music is physically and technically demanding and never allowed the quartet to coast. The members locked in from the opening notes of “Bombtrack,” delivering its muscular mix of rap, rock, punk and funk.

Wednesday’s concert was more than two years in the making, delayed like so many by the coronavirus pandemic. And it was most of the band’s first performance in Cleveland since side project Prophets of Rage, which lacked lead vocalist Zack de la Rocha, popped up outside the 2016 Republican National Convention.

Rage’s music has held up surprisingly well. Tom Morello’s guitar heroics — which often sound like heavy metal run through a pair of turntables — continue to be incredibly effective in the right setting. Bassist Tim Commerford and drummer Brad Wilk are no slouches, either, with Wilk in particular proving to be the secret weapon and propelling the band through the 90-minute show. 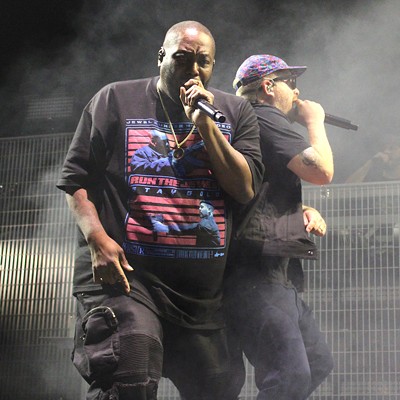 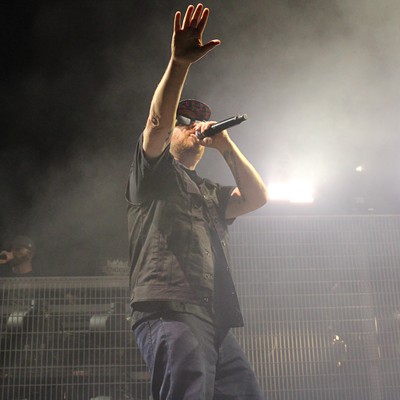 Then there was lead vocalist De la Rocha, forced to sit on a road case after injuring his leg at an earlier show. His voice has the same power as the band’s heyday, evidenced by his agile rapping and combative screams on “Freedom” from the band’s 1992 self-titled debut.

The problem is the band hasn’t changed its tune (the cynical may call it “schtick”) much in 30 years.

Yes, many still find inspiration in the idea of people taking power from politicians.

And yes, many of the issues the band highlighted Wednesday still cause consternation today.

But aside from a few brief segments highlighting abortion rights and Tamir Rice, the 12-year-old Black boy gunned down by a Cleveland police officer while playing with an airsoft pellet gun in 2014, the band did little to update its show. Police brutality and immigration issues were problems then and remain issues now.

A nod to the present would have helped. Instead, Rage settled for generic sentiments and revolutionary nostalgia.

It was content to blast through “Killing in the Name” and “Guerrilla Radio” for an adoring crowd (which featured Guy Fieri, the mayor of Flavortown) that may not have gotten the full message.

Opener Run the Jewels didn’t need to worry about nostalgia, though, because it continues to record and comment on current events. The 45-minute set by duo Killer Mike and El-P (along with an appearance during Rage’s set) was the perfect introduction for the unfamiliar, pulling from all four of its albums and using its energetic tag-team approach to buttress its hard-hitting hip hop.

Killer Mike also noted his work for Nina Turner, who has twice failed to best Shontel Brown in Democratic primaries for a Cleveland-area congressional seat. The rapper said he supported Turner but that “I want Brown to do a good job” before opining that there is a “rainbow coalition” working to better Ohio.

It was the kind of specific statements that were largely missing from their tourmates’ set.

Eric Heisig is a freelance writer. He can be reached at [email protected]

* The original version of this story mistakenly referred to a fan wearing a Paul Ryan t-shirt. It was in fact a Tim Ryan shirt. The reference has been deleted.