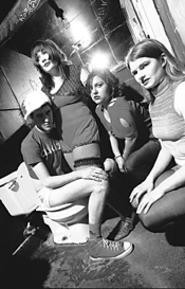 "Gravy Train is the only thing we listen to," says Hunx, as the opening bleeps and beats of "Titties Bounce" kick off the CD. Yeah, that's right: "Titties Bounce." It's a tune that joins such other self-explanatory titles as "Cottonmouth Blow Job" and "Burger Baby," a song about getting knocked up by sirloin. If all this sounds a little too raunchy for your taste, keep reading. As it happens, Gravy Train is on the fast track to success.

In less than two years, these three fly chicks and one flaming gay guy have gone from bastardizing Gary Glitter's "Do You Wanna Touch Me" in a living room full of indifferent, not to mention offended, house-party attendees to a national tour with Bratmobile, a recently released full-length on Kill Rock Stars (home to bands such as Sleater-Kinney and Bikini Kill), and appearances on prestigious compilations, including New York City nightlife-mogul Larry Tee's recent electroclash collection Bad Inc. Not bad for a band that uses nothing more than two crappy keyboards and a drum machine that sells for 60 bucks on eBay.

Gravy Train's music, from anything resembling an adult viewpoint, totally sucks. The sounds are fashioned out of low-budget beats and keyboard riffs that generally don't extend beyond the complexity of "Chopsticks," and the group's production values make your average porno soundtrack sound like a Neptunes cut. Added to this are the lyrics of one MC Chunx, which are as titillating as a money shot and about as complex: "I go to the high school, I go to the high school/To find me a bitch, a young virgin switch," she sings on "Sippin' 40 Oz." It's as far from a positive message as hip-hop can get.

And then, of course, there's the Gravy Train stage show. Featuring Funx manning the beatboxes and keyboards, Chunx on the mic, and Hunx and Drunx -- a.k.a. the fly girls -- pseudo-sodomizing one another through a series of so-sexy-they're-repellent dance moves, the Gravy Train experience combines the flair of Menudo with the shock value of W.A.S.P.

As more and more people hop on the Train, they are discovering the truly amazing nature of this deceptively superficial band. From the warehouses of Oakland to the hottest nightclubs of New York, there are those who are realizing the magic of Gravy Train.

The unhinged sexual escapades that now define the existence of these four performers can all be traced back to a simple coincidence: All four attended Catholic school. Drunx and Hunx grew up together in suburban Pennsylvania. Lascivious from day one, both had their first experience with sex at an early age. "I had boyfriends since kindergarten," says Drunx. "I had my first kiss on the school bus."

"I got caught humping the neighbor's boy," says Hunx. "My dad caught me naked on top of him in the tree house. I was seven."

Just about the only relationship Chunx had in school was with a boy she met at a PeeChees show at the Troubadour in L.A. The boy was named Hunx. Though their fling was short-lived, it helped both individuals define their sexuality once and for all. The drama is best expressed by "You Made Me Gay," the unofficial Gravy Train anthem:

Hunx: "You have the ass, you have the titty/But there's somethin' in my pants that makes me want to go to shitty city."

Hot and bothered, Chunx and Funx moved to Oakland together in late 1999. According to Chunx, her prospects for getting laid changed almost immediately.

"Nobody paid attention to me in high school, and then when I moved here, it was suddenly like this incestuous thing, like everyone wanted to get laid," says the MC. "And I was like 'Whoa, all these people want to do me -- raaaaad.'"

But when one such trick turned out to be a dick, the pair found themselves ditching work in order to cope with Chunx's mounting depression over the dude. As the legend goes, it was during one of these afternoon ditch parties, while watching daytime TV, that Chunx turned to Funx with an idea.

"I was just like 'Funx, I want to make songs about this dude,'" says Chunx. "Like, create art out of pain."

It was that simple. Funx, who had taken six years of keyboard lessons, happened to have an old Yamaha lying around; she co-opted the melody to Gary Glitter's "Do You Wanna Touch Me," while Chunx laid down her rhymes about what an asshole this guy was. Thinking they might be onto something, the duo recruited "the best dancers we knew." They were Hunx and Drunx, who had recently moved out from Pennsylvania. The band's first show set a high-water mark for low-budget performance that, to this day, Gravy Train still aspires to.

"We got everyone to come into this room, and we wore matching shirts that we made with puffy paint that said 'Gravy Train,' and we just danced to the song," recalls Chunx. The song she's referring to is nothing more than a tape-recorded version of Funx playing "Do You Wanna Touch Me" and Chunx lambasting the audience with her raunchy lyrics. "Everyone was like 'What is this -- and why are they making us watch this?' They were so fucking pissed."

Despite the initial negative reaction -- and three subsequent months of party-crashing in which the band received a similar response -- Gravy Train pressed on and has now taken off. They're four dorks who, for the first time, are finally getting a piece of the action, and nothing is going to stop them now.

"Even when no one was into it at all," says Hunx, "no one could bring us down."