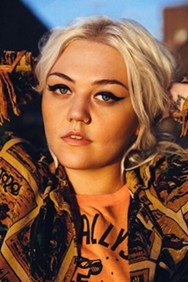 Shane McCauley/Courtesy RCA Records
You can take the girl out of Ohio, but you can’t take Ohio out of the girl. The small Southern town of Wellston figures prominently in gutsy growler Elle King’s story, even next to her star-studded upbringing and the time she brandished a banjo on an RCA executive’s couch. But after years of searching for her own sound, King found herself back in the backcountry with last year’s blues rock and bluegrass-infused debut album, Love Stuff.

The daughter of Saturday Night Live alum Rob Schneider and model London King, King spent her early years in Los Angeles before her parents’ divorce sent her and her mother to southern Ohio. Although her famous father scored King a screen role at age 10 (she shadowed Schneider in 1999’s Deuce Bigalow: Male Gigolo), he had almost no bearing on her musical journey. Rather, King’s stepfather, Justin Tesa, was the one who introduced her to rock ’n’ roll and started a fire within her.

King picked up guitar in imitation of Tesa, and the two continue to share mixtapes of new music on a monthly basis. At age 18, King added banjo to her repertoire, years before artists like Mumford & Sons revived the traditional instrument in pop music. Around the same time, King emancipated herself from possible accusations of celebrity entitlement by eschewing the Schneider name in favor of her mother’s maiden name.

King honed her craft for seven years before finding herself in that RCA executive’s office. At age 15, under the guise of a fake ID, she started making her way onto bar stages to showcase original tunes. It wasn’t long before her parents caught on, however, and started sending her photo around to local establishments, revealing that she was underage.

As a college student in Philadelphia, King filtered through local bands and cut class to perform on the street.

Things looked up when former American Idol judge Randy Jackson picked King for a girl group he was assembling in L.A., but the group’s foundation never solidified. In 2011, she secured the support of RCA (with the help of her banjo) and released a preliminary EP the year after. It would be another three years of performing (this time in support of acts ranging from Of Monsters and Men to Ed Sheeran) before she would make her formal debut with Love Stuff. While on the road, King made pit stops with a number of producers, each of which worked with her to shape years of life and musical experience into an artistic identity.

The very characteristics that make Elle a compelling musician, like her weathered wail and bad girl attitude, also make her stick out, and being different isn’t always easy. Growing up, she felt like the oddball. She says she felt "chubby and goofy-looking and the class clown" next to her “really beautiful and wonderful and charming” parents, as she told the Wall Street Journal. As she matured, King felt torn between two important influences in her life: her straight-laced grandparents and her open-minded mother.

Love Stuff’s opening track, “Where the Devil Don’t Go,” perfectly captures the self-deprecation she still struggles with. As for pinpointing her image as an artist, King credits producer Dave Bassett for helping her to sculpt what was already inside of her. King and Bassett co-wrote the album’s lead single, “Ex’s & Oh’s,” which comes off like Lou Bega’s “Mambo No. 5” with a femme fatale in the driver’s seat. Other album highlights include a pair of seethers: “Jackson” and “Last Damn Night,” the latter of which drew from the assistance of the Black Keys’ Patrick Carney, another blues rock hotshot that once called Ohio home.

Even while traversing the country working with some of the business’s best, King couldn’t help but come back to her rural roots on Love Stuff. Her banjo plucking is a natural asset, and bluegrass ballads coexist harmoniously with rip-roaring guitar tracks. It’s the marriage of her early musical influences: the AC/DC her stepfather introduced her to coupled with the Hank Williams and Johnny Cash her grandparents played for her.