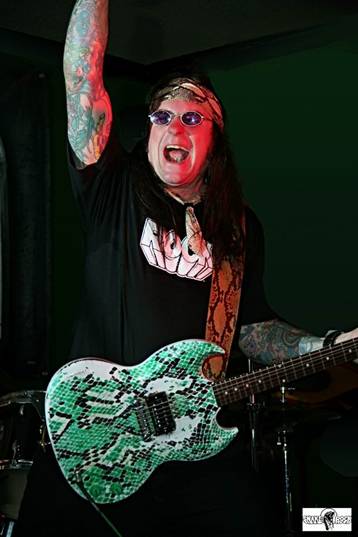 The musician known as Snake Rock (Chris Cremona), who used to front the Cleveland band of the same name, is returning from Las Vegas, where he now lives, to play his first Cleveland show since 1987. It will take place at 8 p.m. Saturday, December 5, at the Breakfast Club, formerly the Hi Fi Club (11729 Detroit Ave., Lakewood). Cover is $10; the Byron Nemeth Band opens.

Coincidentally, the Breakfast Club is the same venue where the band played its first-ever show in 1978, back when it was called Hennessey’s’s. “Getting off the plane and going right to the venue was so weird,” he says. “I have not been here in so long.”

Snake Rock was one of those bands that flitted around the edges of Cleveland’s various music scenes, not precisely fitting in with any of them. Starting as a spandex-sporting glam-rock band, they moved into a grittier hard-rock sound that didn’t dovetail with the new-wave, punk or metal crowds. Still, they managed to attract some attention and release a single here before Snake and bassist Jeff Wray moved out to Los Angeles in the mid-’80s. The two continued to play together following a move to Las Vegas 11 years ago, until Wray moved back to Ohio a few years ago, with Columbus native Kyle Davis on drums.

Snake says that when the idea of doing a show in Cleveland came up, Wray wasn’t interested. But through MySpace, he connected with Bill Brndiar, a guitarist who’d been in a ’70s Cleveland band called Strutter. Brndiar had been an idol of Snake’s growing up, and he was thrilled when Brndiar offered to play bass. He also hooked up in a similar manner with a prominent Cleveland musician he’d never met: guitarist Billy Morris. Morris not only offered to fill out the band on guitar, but gave them a venue — he’s one of the Breakfast Club’s owners. Davis is bringing his drums up from Columbus where he’s on break from his regular gig — he’s a roadie for yet another Cleveland native, drummer Michael Cartellone, now with Lynyrd Skynyrd.

For the past six years, Snake has owned S & K Studios in Las Vegas, where he teaches the next generation of young musicians. His roster of instructors includes former Angel vocalist Frank Dimino and Stryper guitarist Oz Fox.

“We did some shows in Las Vegas but we decided we were getting a little too old to be playing this game,” he says. “So I decided to become a guitar instructor. We teach the kids, and then we put on kids’ concerts, and the instructors are the backup band. The kids have such a good time. I did over 3,000 gigs with Snake Rock, and now I sit in a room and the kids ask me to tell them stories about it. It’s great; I really love what I’m doing. — Anastasia Pantsios