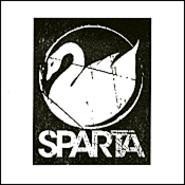 When it comes to At the Drive-In offshoots, the members of Mars Volta have a lock on conceptualizing unexpected detours into weirdness. But Sparta gives the prog-freakers a run for their money on Porcelain, a second album that bends the boundaries of screamo, metal, and punk with a little experimental action of its own. Detached electro clicks perforate the intro and ghostly interlude of "Tensioning," while singer Jim Ward resembles Mark Kozelek as a futuristic metalhead on "Lines in Sand" -- a yawning highlight steeped in the bombast of towering guitar spirals that bears a vague resemblance to Guns N' Roses' "Estranged."

Still, like Sparta's first full-length, Wiretap Scars, Porcelain thrives on contrast: "Travel by Bloodline," a pummeling yowl, segues directly into "P.O.M.E.," a jazz-inflected, 47-second drum interlude, and "Guns of Memorial Park" is a metal song imagined by hardcore heroes Thrice. Although the sprawling and challenging nature of the album might throw off some listeners, Porcelain harnesses its aggression in creative and exciting ways.