I didn't know much going in, but won't make that mistake next time 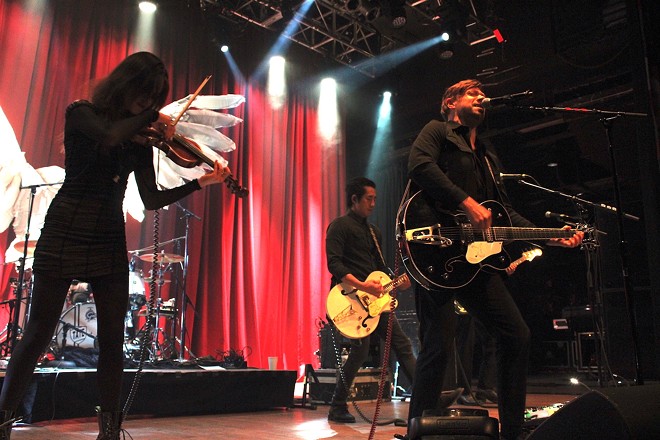 I went in blind to The Airborne Toxic Event concert Friday night at the House of Blues, with a lack of preparation that is ill-advised for any music writer.

OK, I knew a little bit about the band beforehand. I think I had a promo copy of its self-titled debut album at one point, but I don’t think I listened to it more than once. And I certainly haven’t read lead singer Mikel Jollett’s autobiography Hollywood Park, about which more than one friend has raved to me.

But my foolish lack of preparation also meant I went in with no opinions about the band. In that sense, I got lucky and was treated to one of the strongest shows I’ve seen in Cleveland this year.

The five-piece band, now touring behind an album that is more than two years old, served up a mix of beer-guzzling choruses, orchestral pop, heartland rock and punk during a 19-song, 95-minute show. For the uninitiated, think The National mixed with Frightened Rabbit and The Gaslight Anthem, with a dash of Bruce Springsteen thrown in for taste.

Sanding off some of the slick edges of its studio albums and some of its live recordings, Friday’s performance felt raw and vital The Airborne Toxic Event blasted through one tune after another, occasionally augmenting its guitar-heavy sound with keyboards and violin. There was the dramatic “Hollywood Park,” the country-ish “Gasoline” and the bombastic “Changing,” among many others that galvanized the capacity crowd.

Jollett is one of the rare frontmen who can hold a crowd with little more than his voice and a strummed guitar, which was evident as audience members joined in on one singalong after another (when they weren’t trying to talk over the show, that is). Quieter songs like “The Graveyard Near the House” benefitted from his earnest delivery, as did shouters like “Papillon.”

Yes, there were overindulgent moments, like the absurd drum breakdown after “Happiness Is Overrated,” playing “Numb” mostly in the dark and weaving in covers of The Jesus and Mary Chain’s “Head On” and Johnny Cash’s “Ring of Fire” into set closer “Missy.” But those were the exceptions in what was a mostly fat-free rock and roll show (and the covers were actually pretty spot on).

Next time, though, I’ll be more prepared.

Openers In the Valley Below kicked off with a 40-minute set of dreamy pop. The duo’s set was pleasant enough but rarely memorable. However, one wonders if their somewhat muted performance was its response to an exceptionally chatty crowd, unfortunately an all-too-common occurrence at Cleveland concerts.
Setlist (courtesy of setlist.fm and a reporter’s recollection):