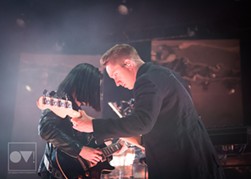 Judie Vegh
It would be reasonable think that indie rockers the XX might be a disappointment live — after all, their music is very sparse, quiet and subdued — qualities that don't exactly make for gripping live entertainment.

But during last night's concert at a chilly Jacobs Pavilion at Nautica, the low-end and beats came alive, giving the band space to improvise in an organic way as the XX delivered a passionate performance that warmed up guests that were bundled in blankets and jackets. You can see a slideshow of photos from the concert here.

The band played a number of tracks from their newest album, I See You, and mixed them with a good portion of the older material. The group also played a song from band member Jamie XX’s solo album.

While fans were waiting for the XX to come on stage, the stage crew erected what looked like hanging sheets of metal in a half-circle behind the stage. However, the tall pillars began to spin in a circle, and it soon became clear that these were actually giant mirrors intended to enclose the band and reflect lights towards the audience.

The concert began with a sample of “Do You Feel It?” by the Alessi Brothers — there was some crowd confusion before the song was slowed down and the audience realized it would lead into a rendition of the band’s new single, “Say Something Loving.” The group followed the tune up with “Crystalised” and “Islands,” two tracks from its 2009 debut album. From that point on, the band balanced the rest of the set with older tracks and songs from the new album.

The stage set-up alternated between being minimalist and maximalist. Guitarist Romy Madley Croft and bassist Oliver Sim posed on opposite sides of the stage with just two mic stands in front of them. Jamie Smith, the band’s beatmaker and percussion section, stood in his elevated DJ booth behind them. For some songs, there were very few lights or effects, but for other parts of the show, the stage bounced with light, and the giant vertical mirrors spun and spun, blasting prisms of color into the crowd.

Halfway through the show, Croft slowed things down; her other bandmates left the stage as she played a stripped down version of “Performance,” saying, “This song means a lot to me, so I wanted to play it alone for you.” The remainder of the show was at high energy — the band played older tunes “Infinity” and “VCR” before Sim dedicated the new song “Dangerous” to the single audience members. “I used to dedicate this song to the couples, but I’m single…and a bit jaded about it,” he joked.

The band finished with a reworked, more electronic version of their older song “Shelter” and then played “Loud Places,” a standout from Jamie XX’s solo album. During the last song, the stage lights turned rainbow while Smith went to work on his drum machine, playing with the rhythm of the song on the fly.

The band returned for an encore, playing "On Hold," a tune that samples Hall and Oates. Even security guards at the venue could be seen swaying and dancing. Then, the crowd went nuts after hearing the first few notes of “Intro” before the band shifted into “Angels.” Fans could be heard repeating the chorus of the song, chanting “if someone believed me/they would be/as in love with you as I am.”

In addition, the band members genuinely felt happy to be playing, thanking the audience numerous times and commenting on how much they were enjoying Cleveland. After the show, the band moved to the front of the stage, held hands, and took a bow. Before leaving, Croft told the audience “We see you. And we love you. Thank you.” As they took a bow, the mirrors behind the stage turned, giving the audience a view of itself.

Sampha, a UK singer-songwriter who has collaborated with artists such as Drake, Solange and Kanye West, opened the show with a solid set. At the start, the crowd wasn’t terribly receptive to Sampha’s soulful voice, but audience members started to respond when he began to play more electronic–based tracks. By the last few songs of his opening set, the sun had gone down, and Sampha had the entire crowd moving along to his alternative R&B.